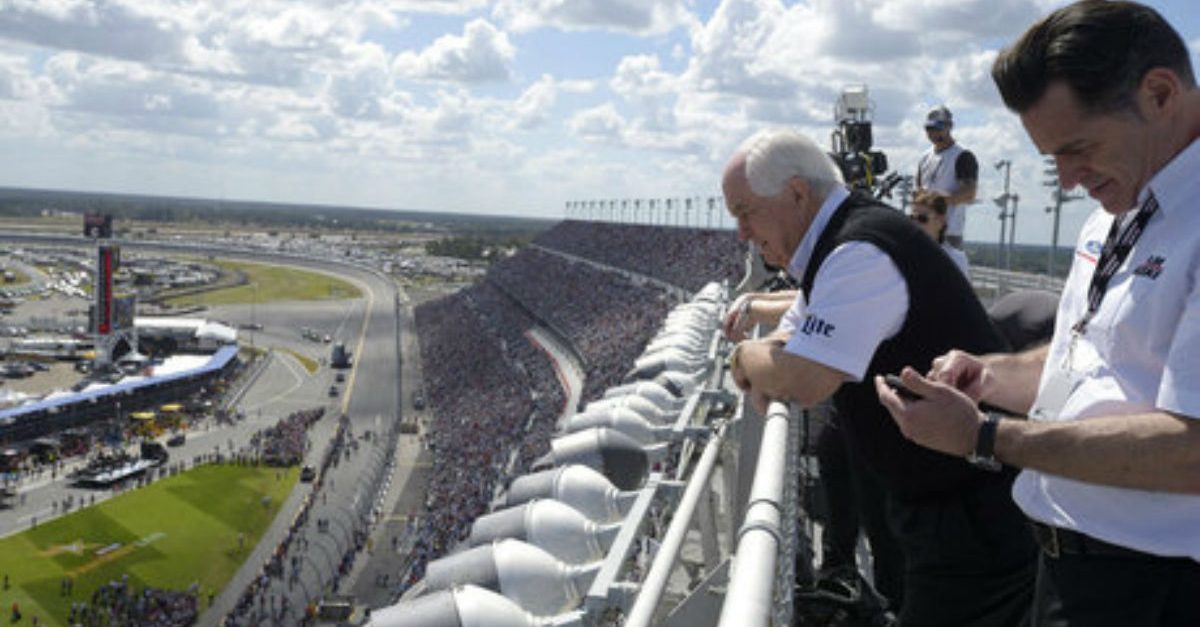 CHARLOTTE, N.C. (AP) ? There was no need for Roger Penske to stay awake for Daytona’s 24-hour sports car race. Penske has people to do that for him, and hanging out atop a pit stand watching telemetry for two trips around the clock is slightly below his paygrade.

When he did it last year, Team Penske’s return season to sports cars racing, somebody had dared “The Captain” to hunker down for the entire Rolex 24 at Daytona. It was an impressive effort many who are far younger than Penske have failed to complete.

Once he had finished the first 24-hour race it seemed silly to do it again, particularly during the cold and blustery rainstorm that drowned Daytona International Speedway on Sunday.

But Penske had committed to be part of the team for the entire event and Team Penske, so organized and unflappable, had meticulously prepared for the conditions.

Penske’s transporter was stacked with thermal underwear ? “I’ve got my ski stuff here,” he said ? heavy water resistant coats and black beanies branded with the Penske mark. The pit stand had been renovated to create additional space so Penske didn’t have to sit all night, a lesson learned from last year’s race, and overhead heaters had been installed.

When the poor weather finally hit the speedway, the crew zipped clear flaps and enclosed the pit stand to escape the wind and torrential rain.

A month shy of his 82nd birthday, in the heaviest rain many racing veterans had ever seen, Penske pulled his beanie down low and hunkered down for an all-nighter.

“He doesn’t even want to sit down, he’s just standing there and it’s crazy,” said Juan Pablo Montoya, winner of the 16th of Penske’s record 17 Indianapolis 500 victories. “That’s why he’s the big man and we are not.”

Read More: This Year?s Rolex 24 at Daytona Will be One for the Books

His reasoning? Should he step away even briefly and one of his two cars had some sort of problem, Penske wanted to be present for problem-solving and strategic decisions.

“I could never do that, I could never stay up,” said Penske driver Ricky Taylor, who noted after the final practice session before the Rolex that Penske had noticed an irregularity on the track and found Taylor to show him where to avoid.

Helio Castroneves, winner of three Indy 500s for Penske, wasn’t at all surprised to see his boss there for the long haul.

“When you are passionate about racing like Roger, he has no reason not to be here for all of it,” Castroneves said. “And three-four hours is all he needs to charge his battery. He has a very quick charger.”

Penske had a sensible rebuttal for Castroneves’ claim that the boss rarely sleeps.

“Guess it all depends on if it is something worth staying awake for,” he said.

Next up is Penske’s Friday night induction into the NASCAR Hall of Fame’s 10th class, which was one of the most competitive elections in years. Jeff Gordon is the headliner, along with Davey Allison and Alan Kulwicki, drivers both killed in aviation accidents at the prime of their careers. Team owners Penske and Jack Roush, a pair of Detroit fixtures who intertwined their many business interests with the automotive industry and motorsports, were elected together.

“Listen I’m just glad they let guys in from the North,” Penske joked about his induction with Roush. Both team owners had been on the ballot several years before they were voted in last May, shortly before Will Power won Penske another Indy 500 title.

“For us going in with Jack, a Michigan guy like we are, a business owner like we are, it’s a big honor for the family, all the people before us who helped us open the doors, and I was surprised when I was picked. You never know when is the right time to go in ? is it because of your age? What’s the right time?”

Penske was elected based on his entire body of work, even though this Hall of Fame is specific to NASCAR. The voting was done five days before the biggest Sunday in racing of the year. Penske started his day with four Chevrolets racing at Indianapolis, where Power won, then the action resumed in North Carolina at the Coca-Cola 600 with three Penske Fords and a fourth affiliated car in the field.

The election was one part of a season in which Penske won both the IndyCar races at Indianapolis Motor Speedway, the NASCAR race at the Brickyard, the organization’s 500th overall victory and NASCAR’s cup title. Penske’s long-awaited return to sports car racing was completed last season with a two-car Acura effort, and Scott McLaughlin won the Virgin Australia Supercars title one week after Joey Logano’s surprise Cup championship.

Across all his platforms, it was the most consistent season for Penske, who in NASCAR now has two Cup titles and two Daytona 500 victories.

“It’s our 52nd year in racing and I guess it was time to make it all happen,” Penske said. “It was the culmination of all our hard work, and we’ve had great seasons and maybe just don’t get all the PR buzz down in NASCAR. Our guys have stayed under the radar, I guess except when our drivers get into a mess, but the NASCAR championship was really, really important that I get that done the year I go into the Hall because that validates and gives the team and me validation to be in the Hall.”

Penske leads by example with standards that require immaculate, crease-free uniforms and a commitment to excellence and professionalism. When Alexander Rossi was hired to join Penske’s Rolex lineup, he shaved his beard on his final day of Christmas vacation and arrived in Daytona with a clean face for the first time in years. No one told him to shave, he just assumed it was the Penske way of doing things.

The organization is indeed buttoned up to Penske’s preferences, but it’s not as straight-laced as outsiders perceive.

Roger Penske is the only person in the NASCAR Hall of Fame who has ever driven in a Formula One race.

With 2 F1 starts, Penske finished 8th in the 1961 US Grand Prix at Watkins Glen pic.twitter.com/OAzMNVka30

“He’s such a people person, he has such a charisma, everybody likes him, everybody wants to work for him and the way he runs the team is unbelievable,” Montoya said. “It’s really funny because from the outside it looks very serious and very strict, but we actually do have a lot of fun and a really good time.”

They understand Penske is the man they must please and that he prefers winning but mandates a standard of excellence to all his processes.

“His ability to lead by example is second to none. He doesn’t have to go in the locker room and give the big pep talk like other coaches and owners have to do in other sports. His presence is enough,” Logano said. “Everybody knows who they’re racing for, who they’re working for and what he expects out of you.”