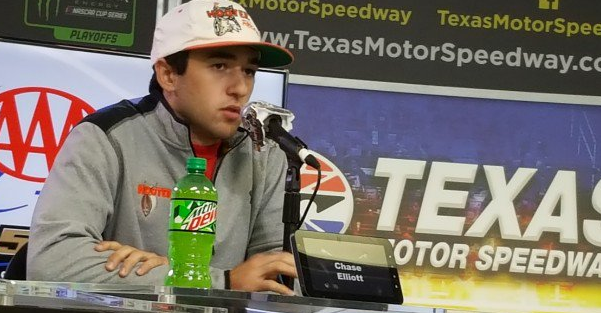 Will he or won’t he?

In order words, will Chase Elliott retaliate against Denny Hamlin for last week’s wreck at Martinsville?

If he is, he ain’t saying. This from Bob Pockrass at ESPN:

Chase Elliott says he isn't going to answer questions about whether he will retaliate against Denny. #nascar

The Elliott-Hamlin feud promises to dominate the race — it’s already dominated the story lines this week — and both drivers will be clearly watched as the go around the track.

While Hamlin has been vocal this week — he insists the wreck wasn’t intentional, even though he apologized for it — Elliott hasn’t said anything, and Hamlin said he hasn’t spoken to him either. The closest we’ve come to any comment from the Elliott camp was a veiled threat by his crew chief, Alan Gustafson.

RELATED: Chase Elliott’s crew chief ways in on his wreck with Denny Hamlin

As noted, Hamlin has been vocal all week.

He was asked about the wreck on SiriusXM Radio’s “Tradin’ Paint,” and he said he isn’t too worried about how Elliott will race him.

ICYMI: @dennyhamlin tells #TradinPaint he has no time to worry about how @chaseelliott will race him for the rest of the playoffs pic.twitter.com/HXYBtKEDxD

Hamlin said wrecks happen in racing, and it won’t be the first nor last a wreck happens in a big moment.

“I’ve told them, however you want to race me is absolutely fine,” Hamlin said. “I’ll be OK with that. I’m not worried about it. I have no time to be worried about anything like that. We have two more races to get ourselves into the final four and Texas is the first step to doing that.”

Hamlin said he’s tried to reach out to Elliott, but Elliott hasn’t been particularly interested in speaking to him about the incident.

Hamlin said he isn’t worried about Elliott trying to wreck him, but it will still probably be in the back of his mind at Texas and Phoenix in the coming weeks.

Both drivers are still fighting are a spot in the final four at Homestead, and these are two pivotal races for both of them. A retaliation from Elliott wouldn’t be surprising given that Hamlin ended his chances of winning last week, and it will be worth monitoring the two drivers this Sunday.