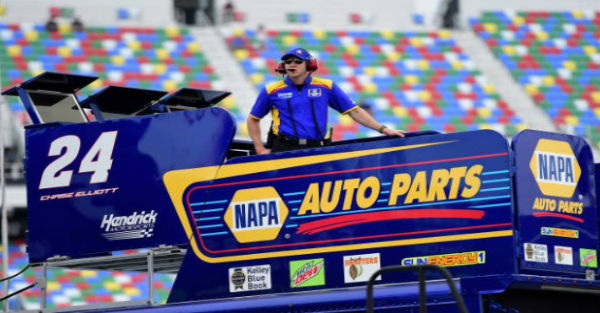 With all of the craziness that transpired down the stretch at Martinsville, it leaves the door open for a possible retaliatory offensive.

At least according to Chase Elliott’s crew chief, if it happens to Denny Hamlin at the AAA Texas 500, he shouldn’t be upset.

RELATED: Here’s the moment Chase Elliott and Denny Hamlin came face to face and had a heated discussion

Crew chief, Alan Gustafson didn’t shy away from his stance on the incident, according to nascar.com.

“I’m cool with it,” said Gustafson after  analyzing the damage to the No. 24 car. “When we have his back tires jacked up going into probably turn three at Texas, that’ll be a bigger corner, then just be good with that, too.”

With only two races left, before the final four duke it out in Homestead, there aren’t too many opportunities left to climb to the top, so each and every point is even more valuable.

RELATED: Here’s the moment Denny Hamlin and Chase Elliott faced off after Martinsville

Elliott’s season has been full of near-misses, with 18 top-10 finishes and another 10 in the top five. The 21-year-old driver has even finished runner-up four times.

To have victory within his grasp, this past weekend, only to have it all stripped away with some sloppy racing on someone else’s behalf has to be pretty frustrating, to say the least.

“I think he’s improved,” Gustafson said. “He’s done an incredible job and it’s unfortunate that race wins have eluded us because I think that’s the only thing that we haven’t been able to do this year. We’ve done everything else.”

It’s interesting to see how the remainder of the season will finish out. It should definitely provide for some excitement.