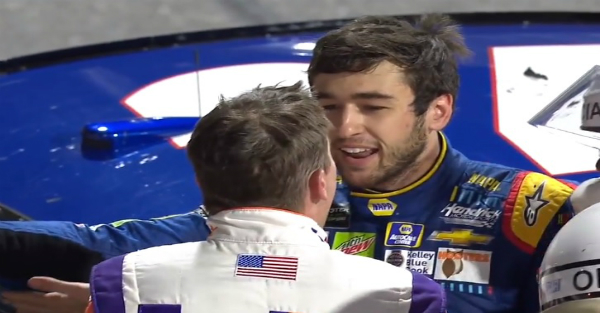 Clearly, they were not exchanging pleasantries.

With less than three laps remaining in the Hollywood Casino 400, Chase Elliott looked to be on the brink of his first Cup series victory. That was until Denny Hamlin bumped the rear of Elliott’s No. 24 car, sending it into the wall.

Related: Chase Elliott had plenty to say after being wrecked by Denny Hamlin

The two drivers shared a heated interaction and if you didn’t catch the race, here’s what was missed.

Hamlin has since issued an apology, admitting that he took Elliott out, but says it was warranted because he was trying to clinch a spot at Homestead.

Elliott wasn’t having it: “My momma always said if you don’t have anything nice not to say anything at all. So, it’s not even worth my time. We’ll just go on to Texas [next week]. … I don’t know what his problem was,” he said in remarks reported by ESPN.

Only 18 points separate the two drivers, with Hamlin in seventh place and Elliott in eighth. It’s understandable to see how Elliott was so upset. A first place finish at Martinsville would have been his first win and could have easily moved him into the top five of the point standings.

With only two races remaining before the final four drivers face off in Homestead’s Ford EcoBoost 400, it’s interesting to see what will transpire in the meantime.