These rivals may not like each other, but agree they also don’t like a new NASCAR pit road rule 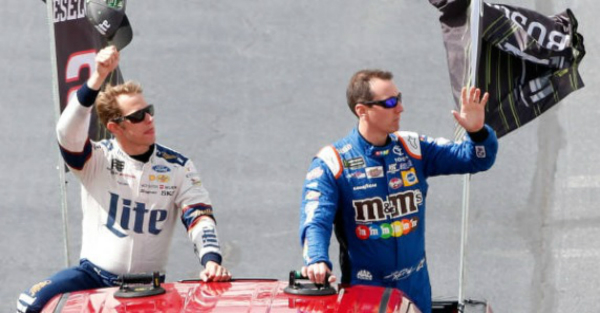 It’s no secret that Brad Keselowski and Kyle Busch don’t really care much for each other, In-fact it’s safe to say they just don’t like each other.

But, as is the case sometimes, even rivals see eye-to-eye on some things, and NASCAR’s pit road rule change has Keselowski and Busch sharing some common ground, according to their comments on ESPN.

RELATED: Kyle Busch makes loud and clear that he just can’t stand this one rival

NASCAR has said the new pit road rule have been implemented in an effort to make things safer for the drivers and their teams. The rule has changed the amount of crew members over the wall on pit road, from six to five.

“I was really surprised when I read the announcement,” Keselowski said. “I didn’t know that it was coming.”

“I don’t get it, but I wasn’t asked to get it,” Keselowski added. “Nobody called and said, ‘Here is why we’re doing this, and here’s why we want you on-board with it.'”

“It was a bit of a surprising move to me,” said Keselowski. “I can’t say that it’s something I endorse, but I don’t know the reasons for why it was done.

NASCAR said one of the reasons for the change is to make pit road safer. The move takes 40 people off pit road.

Keselowski isn’t the only driver that was surprised by the new implementation, nor the only one that doesn’t care for the rule change.

“I don’t see how it’s going to be safer,” Busch said in the ESPN piece. “You’re taking 40 people of pit road, but you’re now going to have an opportunity for 20 tires being loose?”

“The amount of talent you have going over the wall is only so great to be able to carry and do the things they’ve got to do already,” added Busch.

NASCAR executive vice president Steve O’Donnell has said in addition to making the sport safer, the move was also made to add more parity to the sport, in hopes of leveling the playing field.

RELATED: Kyle Busch told a fan he knows what the rival he loves to hate is getting for Christmas

While Keselowski and Busch may share opinions in regards to this matter, we doubt they’ll be exchanging Christmas cards anytime soon.