NASCAR driver said his victory felt “meant to be” 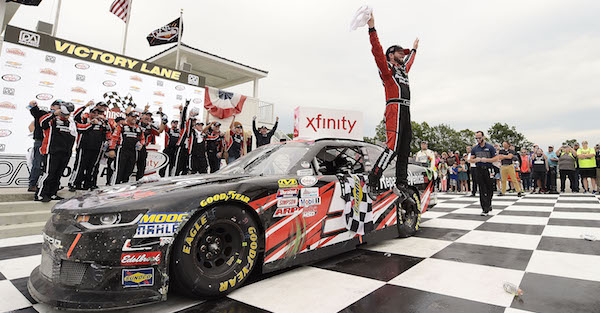 Entering Sunday’s Johnsonville 180 at Road America, Jeremy Clements had raced in 255 races over 12 years without a victory.

Clements thought his chances of winning were over when he went spinning off the track, and he thought he had missed his opportunity for the first win of his career.

“I definitely thought, ‘Wow, good job. Way to go. Could have won this race and you just gave it up,'” Clements said according to NBC Sports. “I just didn?t give up and luckily it worked out. It was like it was meant to be.”

Related: A NASCAR driver reacts after being taken out at the end of what could have been his first win

With the win, Clements secured a spot in the postseason with only three races remaining. He is 17th in the points, and he was mathematically out of contention for a playoff berth unless he won a race.

Clements said the win meant even more to him because he and his dad, team over Tony Clements, built the car he won in nearly 10 years ago.

“We?ve got to make a lot of sacrifices,” Clements said. “My dad said already we run old stuff every week. This car was literally built in 2008. We build our own engines. We just try to bring stuff each year better and better as we can get more money to throw at it.”

About 13 years ago, Clements severely injured his hand in a late-model crash, and it required 10 surgeries to save his hand. Doctors even told him he’d never drive again.

“We were able to prove him wrong, thankfully,” Clements said. “But I had some good doctors to make that happen, so got to thank them for sure. That was a freak deal. That was so long ago it feels like it didn?t even happen now. I definitely got the hand to prove it. I?m just psyched to be here. I can?t even believe we won the race.”

Clements now has an opportunity to win a championship after the regular season concludes in a few weeks.