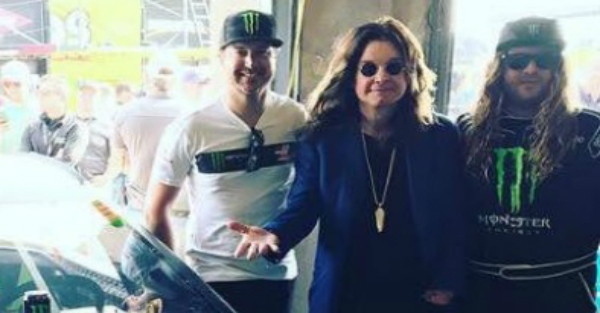 Self proclaimed freelance urchin for NASCAR, @nascarcasm does an excellent job of ruffling peoples feathers, but he also does a great job of providing entertainment.

In a 2017 year-in-review, he has compiled his list of the best tweets of year and some of them are downright hilarious. The collection is aptly titled 2017 NASCAR Twitter Awards. While we’re uncertain as to what award each tweet has won, we do know everyone’s a winner after checking out this recap.

RELATED: Kurt Busch is so proud of his helmets he showed them off before the paint was dry

Legendary rocker Ozzy Osbourne posted a pic of him and Kurt Busch alongside the Monster Energy Ford, while he and his son were filming for their TV show.

Checking out the @MonsterEnergy Car at @NASCAR a couple weekends ago while filming for #OzzyAndJack's World Detour pic.twitter.com/68gKxZwWIr

While Kurt Busch and the Monster Energy car are cool and all, it doesn’t get much cooler than Ozzy!

Back in March, Jamie McMurray posted a pic of his legs while sitting poolside with his family.

It was pretty hot yesterday but I am enjoying the heat today w the family. pic.twitter.com/hZAvhvKOhh

Fellow driver Kyle Larson had a little fun at McMurray’s expense when commented, “cute legs”.  McMurray ended up with the last laugh as he shared a pic of Kyle showing off his legs — as a child using his potty.

In an effort to promote his buddy’s new restaurant, Dale Earnhardt Jr. gave Jimmie Johnson a shoutout on Twitter. Johnson replied that he intended to keep his involvement unknown until they had it up and running.

My bud @JimmieJohnson is opening a new restaurant in Charlotte on September 12th. Be sure to check it out. https://t.co/1sSyyHd5oM

Johnson’s reply was great, as he told Earnhardt it’s good thing that nobody follows him on Twitter. Only about 2.38 million people, no big deal.

Don't say that too loud, we were going to wait to announce my involment until after it was up and running. Thankfully nobody follows you. 😁 https://t.co/MEyHBJtXiu

After learning of his mishap, dale Jr. responded with a Homer Simpson-esque response.

Doh!!! My intentions were good 😣 https://t.co/tTLcKVabTp

Kyle Busch’s fan interaction off the racetrack easily outweigh his on-track antics that tend to rub a few the wrong way. In typical “Rowdy” fashion, Busch covertly signed a fan’s No. 18 flag as it hung from a flag pole outside of their RV, and his wife Samantha documented the entire thing.

These Rowdy fans are going to be pretty happy when they wake up 😀 pic.twitter.com/naL9VrXuzE

And then there was this personal favorite of Kevin Harvick’s son Keelan, wearing a Kyle Larson t shirt to which Harvick simply replied, “I mean what the heck.”

I mean what the heck @KyleLarsonRacin pic.twitter.com/h5C14IV3Xh

Larson tweeted back in support of Keelan.

While those were just some of @nascarcasm’s top tweets of the year, you can check out a few more here.