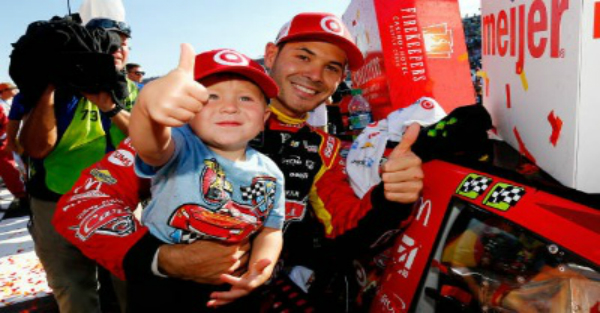 Tony Stewart has never been know n to be on his best behavior, so when it came out that he taught Kyle Larson son a four-lettered expletive, people weren’t the least bit surprised.

RELATED: Kyle Larson may not have had the postseason success he wanted, but he still won a big award

In a recent Twitter post by NASCAR on NBC, Larson shared the story on stage with some fellow drivers, of how Stewart taught his son Owen the new word.

Larson said, Stewart was holding Owen on his chest as he was falling asleep, then Stewart began whispering the word into Owen’s ear for what must’ve been 20 minutes. Somehow it must have resonate with the child, because Larson noticed him saying it from time-to-time. The longer version of Larson’s can be heard below.

RELATED: 2018 will be the year of the Young Guns, as NASCAR gets an influx of talent

Now that Owen has extended his vocabulary by at least one word, when he hears his dad say it, he gets on him and tells him to say “shoot” instead.

But all bets are off when Stewart comes around.