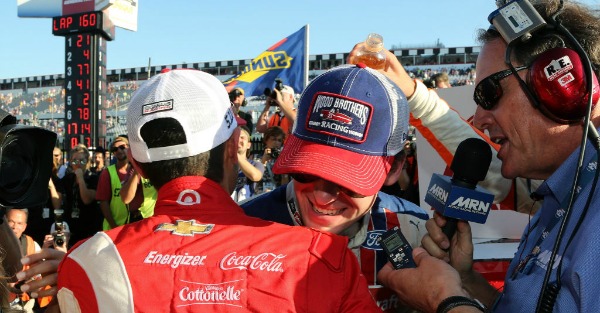 Ryan Blaney is moving to Team Penske after blossoming into one of NASCAR’s youngest star drivers this season, according to NASCAR.com. After a couple of starts with Team Penske early in his career, he spent the next three years of his Cup career racing the Wood Brothers? No. 21 Ford and got his first Monster Energy series win this season at Pocono.

Penske will add the young talent as their third driver next season, which is a move team owner Roger Penske has wanted to make for a while. In a press release, Penske said:

?For some time now, we have wanted to bring Ryan in to run a third car for us, but things just needed to make sense from a timing and business perspective. We have been working on making this a reality, and 2018 is the right opportunity to make this move and return our organization to a three-car team. […] The benefits of having three full-time teams under our roof, along with the continued technical partnership with the Wood Bothers, will help us remain competitive in the ever-changing NASCAR landscape.?

Surely getting a rising young talent would make any team owner happy, but it is especially cool to see Blaney return to a team he has raced with before.