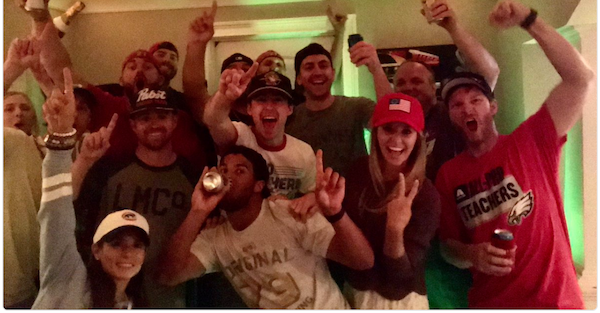 Ryan Blaney earned the first win of his career at Pocono, and he celebrated with a party that included several fellow NASCAR drivers.

Dale Earnhardt Jr. helped kick the party off by delivering four coolers of beer for Blaney and his crew. Junior and Blaney are neighbors in Charlotte, North Carolina.

Dropped off a few beverages at the winners house tonight. 🍻

Based on the time stamp of Bubba Wallace’s tweet, the party lasted well into Monday morning.

Number 1 for @Blaney such a special day for him, glad to be a part of it! pic.twitter.com/QMEn8lQcsF

Blaney’s win was win No. 99 for Wood Brothers Racing.

We did it!! Such a great privilege to driver for the Wood Brothers. Good times with good friends is all I can ask for. Let's go for win 100! pic.twitter.com/3joF2o2uAe

Blaney will go for win No. 2 of his career and win No. 100 for Wood Brothers on Sunday at Michigan International Speedway.