Ryan Blaney credits one driver for his first career victory 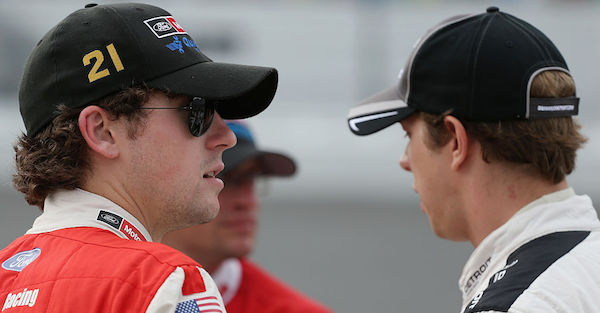 Blaney had interviewed Keselowski the day before after the latter had won a NASCAR Xfinity Series race, so Keselowski returned the favor on Sunday.

When Blaney was in the Camping World Truck Series, he drove for Brad Keselowski Racing from 2012-2015. He won four times, and the two drivers have remained close ever since.

“I wouldn?t be here without Brad, to be honest with you,” Blaney said according to NBC Sports. “He?s the one that gave me my start in 2012. I started driving his trucks then and it led to the Penske deal, led to the Wood Brothers deal. I would be nothing if it wasn?t for him taking a chance on me. He?s been a huge person I?ve looked up to. For him to do that really, really makes me feel good. It?s really cool to see his support still. He?s a great person.”

Related: A young driver picked up his first career win at Pocono

Everyone @TeamBKR is so proud to see you reach the top. 👍🏻😁 pic.twitter.com/mTbYEMxaGK

Blaney’s win sparked praise from his competitors and fans on social media following the race.

Good job @blaney. Congratulations on your first of many cup wins!

Just didn't have the speed we were looking for to be competitive this weekend… but very happy for my buddy @Blaney getting the big Win!🏁

@Blaney winning his 1st race in that fashion is amazing. Had to hold off one of the sports best in @KevinHarvick. Great race!!!

How bout this guy! Super stoked for ya pal, very well deserved. https://t.co/scSewtFch1

Blaney became the ninth driver to secure a spot in the playoffs. Only 12 races remain, and several high profile drivers are currently on the outside looking in for the playoff picture.

The next race for the NASCAR Cup Series is Sunday, June 19 at Michigan International Speedway.