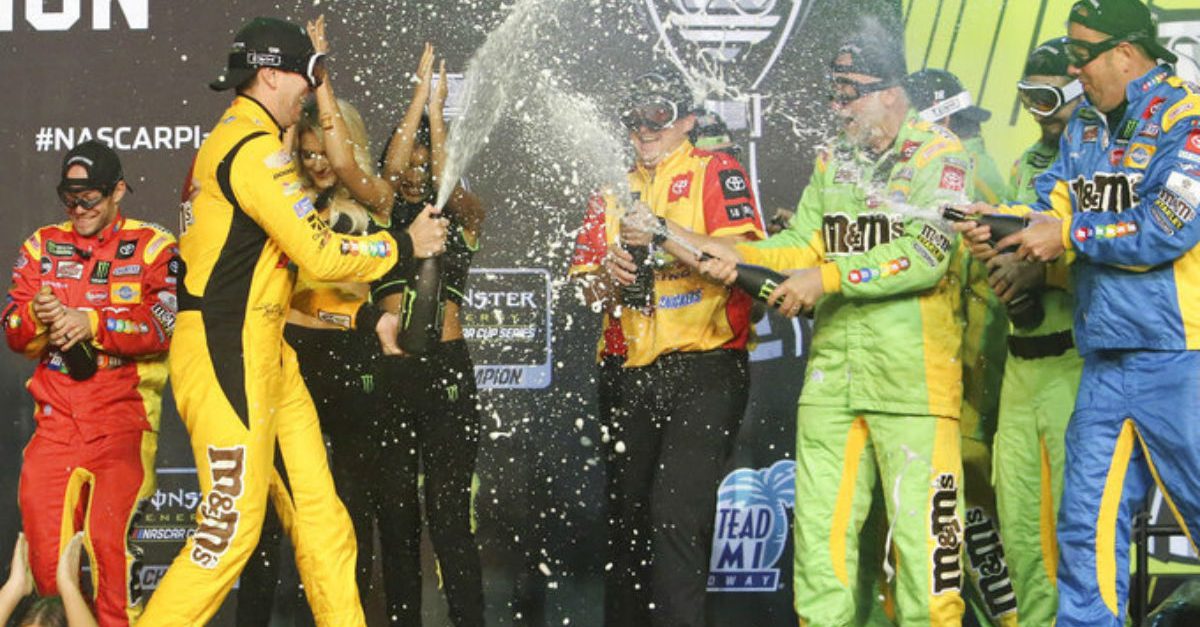 HOMESTEAD, Fla. (AP) ? The freefall is over, rock bottom hit more than a year ago, the restart button officially activated.

Just how cool is NASCAR these days? Michael Jordan said before Sunday?s championship race he sets his clock to watch every week.

NASCAR needs more fans to want to be like Mike, and the 2019 season showed promise that many of the issues plaguing the sport are starting to fade.

The offseason will have the refreshing feel of optimism for the first time in probably a decade. NASCAR had lost its way, growing too big, too fast and leaving behind a loyal yet aging fan base. The series has suffered in nearly every metric ? attendance, television ratings, costs, sponsorship pullouts ? and there seemed no end to the slide.

?If you take stock of where we are, I’d say we had an incredible season,? NASCAR President Steve Phelps said at Homestead-Miami Speedway before the championship finale.

Since an overdue change in leadership in August 2018 following the arrest of then-chairman Brian France on drunken-driving charges, the new regime has instilled a sense of confidence and direction that has earned kudos from all corners. Changes are finally coming: The stagnant schedule is getting a shakeup, there will be a new car in 2021 aimed at lowering costs and a new sponsorship model is expected to be announced early next month.

On the track, three title contenders from the second-tier Xfinity Series are being promoted to the elite Cup Series, which has marked a changing of the guard as rookies and newcomers are landing seats once locked down by Jeff Gordon, Tony Stewart, Dale Earnhardt Jr., Carl Edwards, Matt Kenseth, Kasey Kahne and other popular and successful stars.

The rules package introduced this season made the racing better at intermediate tracks and superspeedways; the package failed to deliver at short tracks and Phelps admitted Sunday tweaks are needed even though NASCAR had seemed against any changes for 2020.

It is an imperative fix because the season finale moves next year ? after 18 years at Homestead ? to suburban Phoenix, and the racing there a week ago was disappointing for a showcase playoff event.

NASCAR needs as much as excitement as possible and Sunday?s finale was heavily hyped as three of Joe Gibbs? drivers raced Kevin Harvick for the championship. Kyle Busch became the 16th driver with multiple Cup titles when he won Sunday?s race to earn his second championship, and while the race itself wasn?t a nail-biter, it was rich with drama for the contenders and capped a compelling 10-week playoff series.

Martin Truex Jr. probably had the Toyota to beat his Gibbs teammates but his crew made an astronomical gaffe during a pit stop. Truex had led 103 laps when his team accidentally put tires on the wrong side of his car. He had to return to pit road for a stop that dropped him a lap off the pace. He climbed back to a second-place finish, a full comeback too much to pull off.

Denny Hamlin also gave Busch a brief run but rookie crew chief Chris Gabehart made an aggressive aerodynamic call late in the race and a large chunk of duct tape placed on Hamlin?s grille caused his engine to overheat and ended his title chances.

Harvick, meanwhile, didn?t have much of a chance against a Gibbs organization that won a NASCAR-record 19 of 36 races this season. He tried a different strategy late, hoping to give himself any opportunity to race the Gibbs cars at the front, but just didn?t have enough for the most dominant organization of the year.

Gibbs opened the season with a 1-2-3 finish in the Daytona 500 and ended it with a 1-2-3 finish at Homestead and the fifth driver championship in team history. It came in a year the organization has spent mourning the January death of co-chairman J.D. Gibbs, and his widow and four sons were in attendance at both races.

Busch praised Gibbs, an NFL Hall of Fame football coach who will be inducted into the NASCAR Hall of Fame in January, for his leadership and work ethic.

?That man is relentless, and he is at the shop, whether it’s 7 or 8 in the morning, every single morning, that man is there, and he works. This is his life,? Busch said. ?If he’s at home and in North Carolina, he’s at the shop, and if he’s got to go somewhere and get on an airplane and fly somewhere, it’s for his race team or his family. That’s how a leader is, and everybody follows the leader that you have from the top.?

NASCAR is seeing that firsthand since Jim France replaced his nephew 15 months ago and then elevated Phelps to president in charge of day-to-day operations. Jim France has a noticeable presence at the race track, is hands-on in rebuilding NASCAR and gave the green light to many of the ventures now under way.

There are still areas of concern.

NASCAR’s television contract with Fox Sports and NBC Sports runs through 2024 and Phelps said talks on an extension have not begun. Sunday’s finale on NBC drew a 2.2 rating and 3.7 million viewers, down from 2.5 and 4.1 last year. NBC Sports’ overall ratings for the last two seasons remained flat.

Fans have loudly called for more short track racing, more road courses and even a dirt track, and NASCAR said it will not be shy in trying new ventures. The series last month purchased sister company International Speedway Corp., to merge into one company, and Speedway Motorsports Inc. took its share of race track ownership private. It gives both flexibility to change race dates, try new ventures such as the 2020 doubleheader at Pocono in Pennsylvania, and potentially allow for new venues to debut on the schedule.

?If you take a step back and think back to where we were in February at the Daytona 500, it was an industry that was finding its footing, right? A sport that was finding its footing,? Phelps said. ?You could feel the sport kind of rallying around itself. You could feel momentum that was coming, a real excitement. That difference, in my opinion, really starts at the top. It starts with Jim France and his vision.?