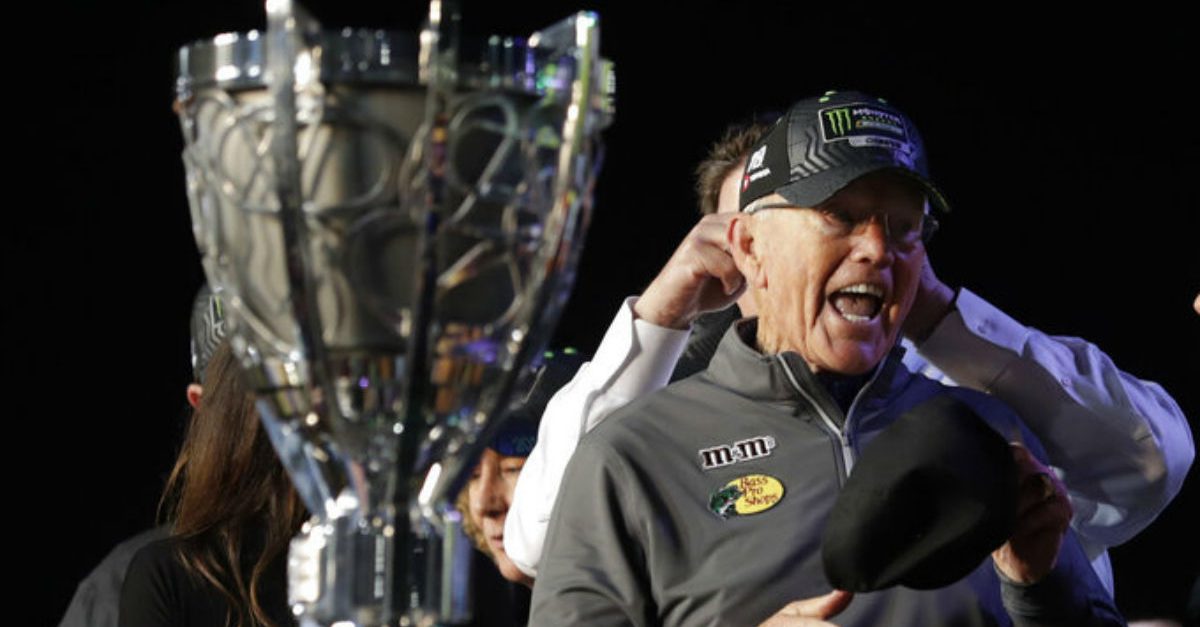 HOMESTEAD, Fla. (AP) ? Joe Gibbs won the first race, the last race and more than a dozen in between. His most dominating season in 28 years as a NASCAR team owner culminated with his fifth Cup Series championship.

This one had to be more special than the others.

Gibbs dedicated the season to his late son, J.D., who died in January after a long battle with a degenerative neurological disease. Joe Gibbs Racing responded with 19 victories in 36 races ? a record for NASCAR’s modern era ? and another title for the three-time Super Bowl-winning champion who still goes by Coach.

Kyle Busch put Coach atop the racing world Sunday by winning the season finale at Homestead-Miami Speedway. It was the second Cup championship in five years for Busch and Gibbs, who also won titles in 2000 (Dale Jarrett), 2002 (Tony Stewart) and 2005 (Stewart).

Gibbs felt like J.D. had a hand in making the latest one happen.

?I think he’s definitely a part of this,” Gibbs said. ?I miss him so much. … It?s kind of hard to put in words. But it?s been special and different, and it was great to finish it up the way we did tonight.?

J.D. Gibbs was a part-time driver and over-the-wall crew member when he first started working for his famous father. He made 13 NASCAR national series starts between 1998 and 2002. He stepped away from JGR in 2015 after he was diagnosed with “conditions related to brain function.”

The final race he was able to travel to was Busch’s first Cup Series championship. Gibbs was 49 and co-chairman at JGR when he died.

Joe Gibbs had three chances to win the title, with Busch, Denny Hamlin and Martin Truex Jr. locking up three of the four spots in the championship field. His former NFL team, the Washington Redskins, wished Gibbs and his three drivers luck with a message on the video boards before their game against the New York Jets on Sunday.

Hamlin and Truex were widely considered the most likely title contenders to win it all for Gibbs. Hamlin won last week at Phoenix and had all the momentum, and Truex had a series-high seven victories in 2019.

But both of them had pit-road issues that proved costly.

Truex’s crew mixed up the right- and left-side front tires on lap 120, causing steering issues and forcing the 2017 series champion back to pit road. Hamlin?s crew put too large a piece of tape on the air opening to his engine, causing it to overheat and forcing him to make an unscheduled stop.

Both of them fell a lap back.

Truex recovered and finished second for the second straight year.

Hamlin’s error came later in the race. He dropped from third to 19th because of the stop with 46 laps remaining. He battled back, but didn’t have enough time to make up for the error and finished 10th.

“Certainly we got a little aggressive there and it cost us,” Hamlin said. “It just didn’t work out.”

It did for Gibbs, though.

The organization broke the modern-era record (since 1972) for wins by the same team in a single season. Hendrick Motorsports, with a lineup that featured Cup champions Jimmy Johnson, Jeff Gordon, Casey Mears and Busch, won 18 races and the championship (Johnson) in 2007.

“It’s just a great year,” Hamlin said. “We won 19 races as an organization. That’s the most in this era. That’s a good thing. In the world where we just keep getting more common with everything ? common pit guns, common this, common that ? JGR continues to set itself apart, and that’s the people and the effort that they’re putting in. I think that it really says a lot about the organization, no doubt.”

JGR won the big one ? the season-opening Daytona 500 with Hamlin ? and the more-important finale with Busch.

“It’s a thrill for us,” Gibbs said. “J.D. spent his entire professional life building our race team. This whole year I think is just a tribute to him. I think everybody saw the Daytona 500, everything that’s happened this year. I know the Lord had his hand in what has taken place. I believe J.D. had a great view of it.”