Tempers flared even among teammates during the tension-filled Brickyard 400 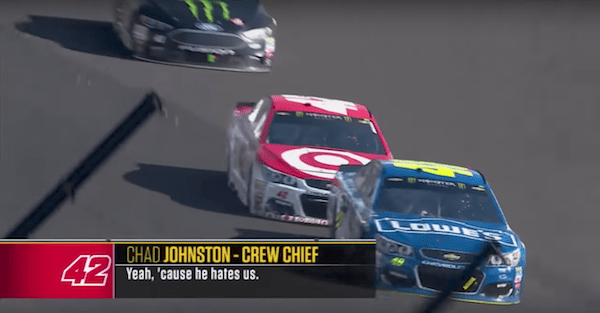 Crashes were the theme of this year’s Brickyard 400. Nearly half of the 40-driver field wrecked out and didn’t finish the race, and most of the drivers were on edge throughout the race.

FOX released the best quotes from the radio scanner audio captured during the race, and some drivers were happy to blame competitors for crashes or bad decisions.

Related: Playoff contender said the end of the Brickyard 400 was “ridiculous”

Kyle Busch and Martin Truex Jr. were working together throughout the day on restarts, but Busch eventually decided he wanted to stop being so friendly and race Truex. Truex indicated he didn’t want to do that, and his team didn’t think it made sense, but they decided to anyway.

The decision backfired on Busch as the two collided soon after the restart. Truex took the blame for the wreck, but Busch crew chief Adam Stevens later confronted Truex’s team about the wreck.

Related: Two playoff contenders took each other out in a fiery crash

A crash between Kurt Busch, Clint Bowyer and Erik Jones knocked all three drivers out, and they were understandably frustrated. Jones, who is just outside of playoff contention, showed the most frustration in an expletive-filled rant.

Bowyer directed his frustration towards Danica Patrick, saying “(expletive) her.”

Kyle Larson wrecked late in the race, and he can be heard channeling Bruce Springsteen saying “I’m on fire.”

Kasey Kahne, who won the race, told his crew he was cramping up while driving and was concerned about finishing the race.

Perhaps the biggest insult from one driver to another was from Denny Hamlin to Trevor Bayne. After Bayne wrecked, Hamlin said, “I’ll be so glad when that company is out of money. He is awful.”

It’s unusual to see so many wrecks and restarts in one race, and it’s understandable why so many drivers were frustrated during the race.