Two playoff contenders took each other out in a fiery crash 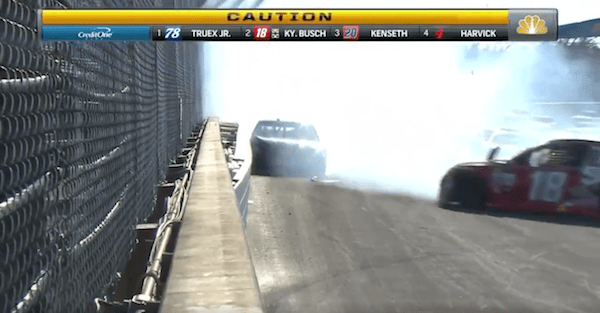 Martin Truex Jr. and Kyle Busch were leading the Brickyard 400 early in Stage 3 after a restart when the two drivers collided and crashed.

Truex’s engine was engulfed by flames, and both drivers were eliminated from the race on Lap 111.

It's over for @KyleBusch and @MartinTruex_Jr at @IMS! They crash on the restart late in the #Brickyard400! #NASCARonNBC

Here’s the view of the crash from Kevin Harvick’s car.

Busch, who has yet to win a race this season despite being second in number of laps led, was looking to win his third straight Brickyard 400.

Busch said it was “very, very frustrating” to have the race end that way, especially since he’s won at Indianapolis Motor Speedway the last two races and he doesn’t have a victory this season.

Busch was third in the points entering the Brickyard 400, and his playoff status is still likely in good shape unless several first-time winners pick up victories down the stretch.

Truex has dominated most of the season, and he has three victories on the year, but this was a missed opportunity for him on Sunday. He took the blame for the accident following his exit.

"It was totally my fault." @MartinTruex_Jr.

With @KyleBusch and Truex out, who will win? Tune into NBC or stream: https://t.co/1YDr5Gt8E9 pic.twitter.com/xvvigDjTLU

“I just got loose and wrecked him,” Truex said. “It was totally my fault. … I’ve got to take the blame for that one. Obviously, it was my fault. I hate it for Kyle. He had a great car.”

The two drivers will look to redeem themselves next Sunday at Pocono Raceway.