NASCAR Just Did Something It Hasn’t Done Since 1960 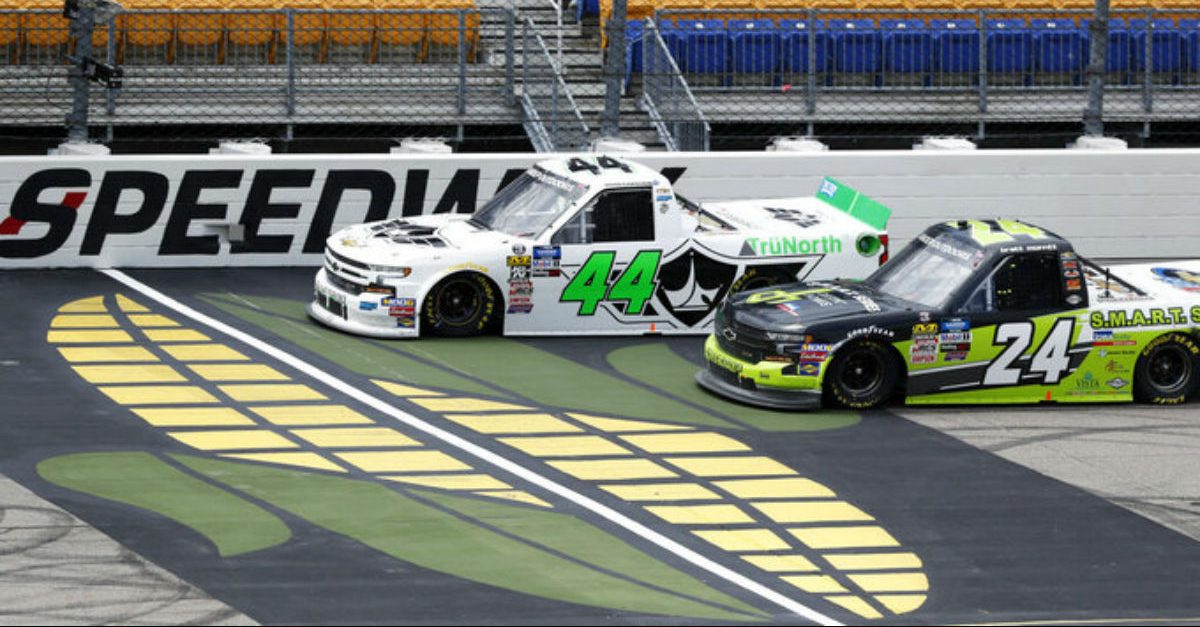 NEWTON, Iowa (AP) ? NASCAR overturned a victory for the first time under its toughened new policy on cheating when Brett Moffitt was declared the winner of the Truck Series race at Iowa Speedway after Ross Chastain failed a post-race inspection.

Chastain led the final 141 laps of Sunday’s 200-lap race, but series managing director Brad Moran said the winning No. 44 was too low when it was measured with NASCAR’s height sticks.

“The height sticks have warning yellows in them and reds, and it was right off of all of them, so unfortunately it was extremely low,” Moran said.

The disqualification was the first under strict new rules put into place at the start of this season to deter the culture of cheating ? and it delivered a much-needed win for Moffitt, a native Iowan racing at his hometown track.

“I think, for the integrity of the sport, it’s the right thing to do,” said Moffitt, who never led a lap in the race.

“Obviously I came out on the good end of it. If I was in Ross’s shoes, I wouldn’t be too thrilled about it.”

Niece Motorsports tweeted after the race that it will appeal the decision. Team owner Al Niece said in a statement that the truck passed opening and pre-race inspections.

“We believe that the No. 44 truck sustained minor damage, which left the truck too low following the race,” Niece said.

NASCAR said the last time it disqualified an apparent race winner was April 17, 1960, when Emanuel Zervakis’ victory at Wilson Speedway in North Carolina was thrown out because of an oversized fuel tank. But the last driver to be stripped of a victory was Mike Skinner in a 1999 race at Atlanta Motor Speedway. Skinner led the final 41 laps but NASCAR said the next morning his car had an unapproved cylinder head. The win was handed to Dave Blaney and Skinner was dropped to 43rd and last in the field.

Reading through twitter and @cfchangs9 captured my best response to those going after me for another team failing tech. The victory beers still taste damn good. pic.twitter.com/uma7sgdHmn

Skinner and his team filed an appeal, which was overturned two days later. Skinner was once again awarded the victory, but did not receive the usual first-place earnings.

NASCAR announced in February that thorough post-race inspections would take place right after the race at the track instead of midweek at the sanctioning body’s research and development center outside of Charlotte, North Carolina.

Winning teams found in violation of the rules in previous seasons were penalized with post-race fines, point deductions and/or suspensions. But drivers didn’t have victories taken away from them until Chastain was stripped of the victory Sunday.

The decision could prove to be devastating for Chastain’s season.

Chastain recently switched the championship he’d compete for in 2019 from the Xfinity Series to Trucks, a risky move that left him at the bottom of the standings. The apparent win at Iowa meant that Chastain would only have to finish 20th or higher in the Truck standings to receive a playoff berth, and the driver nicknamed “The Melon Man” was so thrilled about it that he smashed a watermelon to the ground in victory lane.

Obviously I’m disappointed to get the news about the post-race inspection. @NieceMotorsport is going to appeal NASCAR’s decision, and I stand behind our team!

Instead, Chastain has now been scored as if he finished last, and his victory and bonus points have been stripped away. Chastain also lost the $50,000 he had won for taking first in the “Triple Truck Challenge” marketing promotion that included the Iowa race.

Chastain, who spoke at a news conference after his apparent victory, could not be located for comment after his disqualification was announced.

As for Moffitt, he said he had been drinking beers in his motorhome and on his way to the airport in nearby Des Moines and was “mad as hell” about losing when he got the call informing him that Chastain had been disqualified.

Moffitt and his beer buzz were summoned back to the track for the second winner’s news conference of the day.

“I went from drinking my sorrows away to being happy,” Moffitt said.