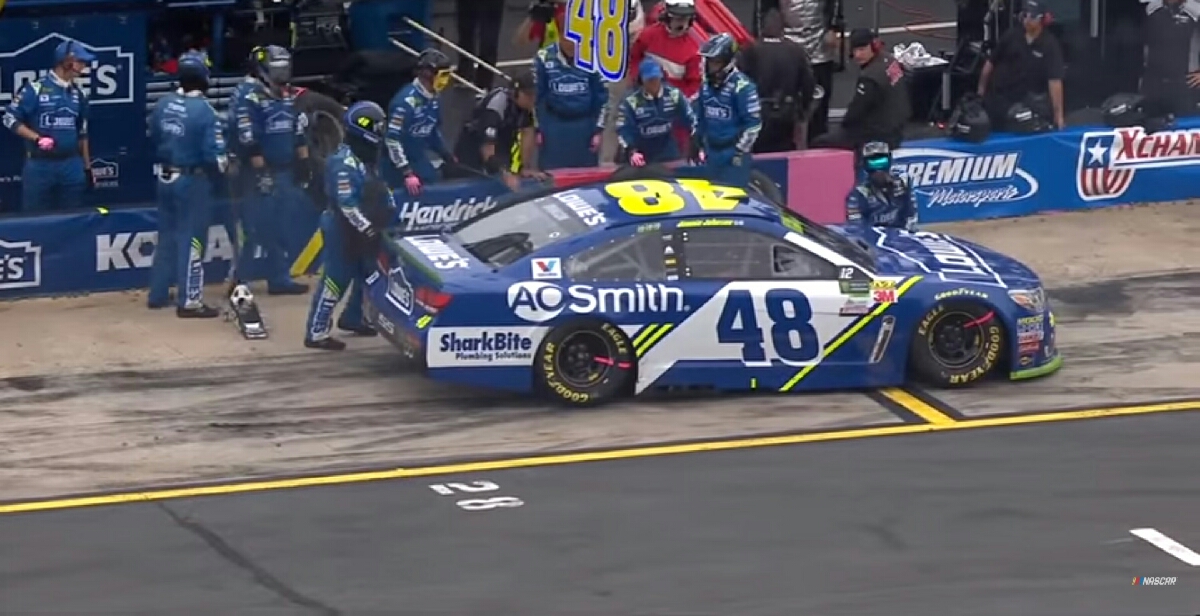 So just what does constitute a pit lane violation in NASCAR? Kyle Larson says what Jimmie Johnson’s crew did at the Bank of America 500 last Sunday should have resulted in a penalty, but NASCAR says otherwise.

Watch the video above to see what Larson is talking about. Johnson pits during a caution on lap 280. His crew is changing tires, and as soon as the jack drops, Johnson takes off….then stops. The front-tire changer hadn’t finished tightening all the lug nuts, forcing Johnson to back up a little while the crew member finished. Larson’s issue is that Johnson didn’t back up all the way into his pit box for the work to be completed.

“I don’t think it is right, you know, NASCAR’s kind of excuse from him not having a penalty,” Larson said at Martinsville Speedway Tuesday, via Kickinthetires.net and reported by Sporting News. “I would like to see NASCAR just use the rule, you know, make us back all the way up to our pit stall like they typically do.

Usually, servicing a car outside of the pit stall results in a one-lap penalty. NASCAR says Johnson penalized himself with the time it took to back up and fix the problem, and at that point, they’re more concerned with making sure the car is safe.

“We’ve been calling this particular thing consistently the past couple years with the lug nuts,” NASCAR’s senior vice president of competition, Scott Miller said Monday on SiriusXM NASCAR Radio, via Motorsport.com. “The way we look at that is they did their normal pit stop in the pit box, he left, they realized they had a lug nut (issue) and at that point,to us, it becomes a safety issue.”

Larson says he can live with the explanation as long as NASCAR treats everyone equally and when it comes to pit violations.

“I say follow the rule,” Larson said. “But as long as they keep it that way and it’s not a judgment call, I guess.”