NASCAR had its share of feuds this season, and here are the best of 2017 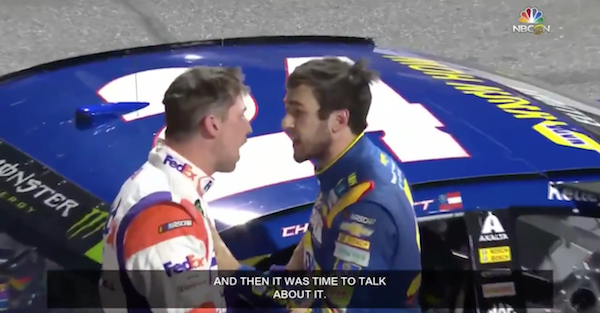 There are at least two things you can count on in racing. Some drivers will win, some will feud with other drivers, and some will do both.

If there’s one thing the 2017 season didn’t lack, it was feuds among drivers.

One of the most recent and possibly the most memorable of 2017 happened at Martinsville between Denny Hamlin and Chas Elliott. In a controversial move, Hamlin caused Elliott to crash towards the end of the race, robbing him of his first win in the NASCAR Monster Energy Cup Series. Elliott was not only positioned to win the race, but it would’ve secured him a spot to compete for a title at Homestead. Afterwards, Elliott was furious and his crew chief hinted at retaliation.

RELATED: Austin Cindric continues to defend a move many have called dirty

During the same race, Ryan Blaney and Kevin Harvick got at each other pretty good. With Harvick punishing the bumper of Blaney a few times and Blaney brake-checking Harvick, the two even banged doors at one point. It led to an altercation on the track. It didn’t get nearly the attention of the Elliott and Hamlin feud got, but needless to say Martinsville helps bring it out of the drivers.

Martin Truex Jr., eventually would capture the 2017 crown, but not before he shared his displeasure of a few drivers. At Texas, he was upset with Trevor Bayne for ‘being in the way every week’. Earlier in the season he had an issue with Derrick Cope hitting the wall, which led to a caution. Truex was winning the race prior to the restart, but lost to Kyle Larson.

Elliott Sadler and Ryan Preece have to be separated

In the Xfinity Series Cup Championship race, Elliott Sadler and Ryan Preece had to be separated by track officials after the race. Sadler was running neck and neck with his JR Motorsports teammate, William Byron, when Preece slowed him down. After Byron cleared away from the two drivers, Sadler gave him a bump to let him know he wasn’t too pleased with the whole ordeal. Ultimately Byron won the championship over Sadler, who finished in second on the season.

Earlier in the November at Texas Motor Speedway, Ross Chastain and Brendan Gaughan, were involved in a fight after the Xfinity Series race. By fight, we mean punches were thrown and quite a few words were tossed back-and-forth after the fact. Chastain suffered a black eye and a fat lip, after being blindsided by Gaughan and some of his crew members

Ross Chastain says he is ok after a scuffle with Brendan Gaughan and crew. He has a little bit of a shiner. pic.twitter.com/uZNbeJdOTY

Well, they didn’t go at it. The closest they got was Busch saying, “There are some guys you just don’t like.” But you have to have them for old times sake.

Everybody knew it was coming, and it put on a nice cap on what many people think is the feud of the year. But you can take our poll and tell us which feud you liked best.

While these are only some of the feuds that made 2017 a year to remember, they were some of our favorites. Which one was your favorite?