Martin Truex Jr. rips one of his rivals and the “dummy” who was alongside him 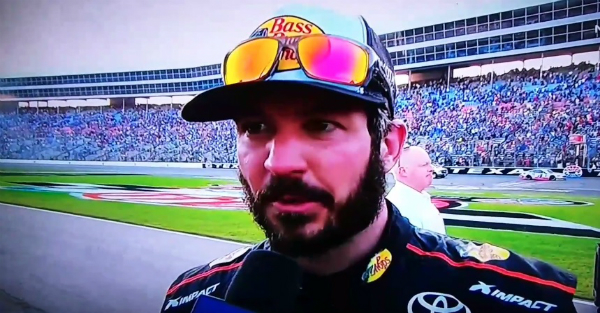 When it was all said and done at the Texas Motor Speedway, points leader Martin Truex Jr., managed to clinch a position in the championship race at Homestead, and he did it without winning the race.

Truex Jr. pulled off a second place finish, after leading for more than 100 laps. But since the round of eight, he has yet to win a race, after winning seven races prior.

With 10 laps to go, Truex Jr. lost the lead to Kevin Harvick in the No. 4 car. Harvick would go on to take the checkered flag and Truex Jr. felt that someone else had gotten in his way and kept him out of the winner’s circle.

RELATED: Two spots at Homestead get locked up in a dramatic finish at Texas

Truex Jr. shared his thoughts on the race with NBC Sports, in the video above:

“Well, I knew he was quicker (Denny Hamlin) once he got around I guess it was,” said Truex Jr. “He started coming real fast, and that’s all I had. So just struggled a little bit on the long run today, which, typically is where we’re our best.”

“We get too loose in those long runs, so only so much I can do inside. And then had the No. 6 (Trevor Bayne) and some other dummy racing side-by-side in front of us, and I was way loose in traffic when I’d catch somebody, and I was way loose going into one, and Harvick jumped my outside. One of those deals where I think we’d held him off at a clean race track, but the 6 car’s in the damn way every week, so it’s pretty normal.”

Truex Jr. is no stranger to voicing his frustrations when it comes to drivers (not on the lead lap) that are keeping him from progressing. It happened earlier in the year at Richmond, when the race went to caution with one lap to go. Rather than maintain his lead and collect another victory, Truex Jr. ended up wrecking his car in overtime and losing to Kyle Larson.

RELATED: Martin Truex Jr. slams a driver after Richmond: ‘He can’t even hold his damn line’

Truex Jr, Harvick, and Kyle Busch are three of the drivers that have already secured a spot at Homestead. It should be interesting to see what happens between the five remaining eligible drivers in Phoenix this weekend.