Dale Jr. makes a last-minute change at Talladega and it’s sure to disappoint some fans 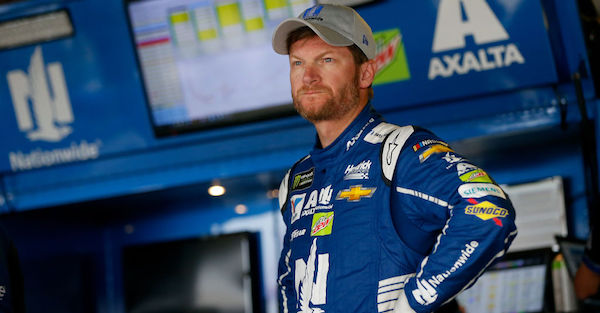 It was that little bit extra that Dale Earnhardt, Jr. fans were excited about. Jr would be wearing a helmet cam in his final race at Talladega. Not anymore.

Dale, Jr. tweeted out Friday evening that he’s changed his mind out of concern over not seeing well.

I won’t be running the helmet cam during Sunday’s race. It obstructs my view of the corner and the rear view mirror too much.

Dale, Jr. had decided to wear a helmet camera all weekend to capture his final go around at the track that has provided his family a ton of success.

RELATED: Dale, Jr. tells us why he’s so motivated this weekend, and what he’s doing differently

Between Dale Jr. and the late Dale Sr., the father-son combo has collected 16 wins at the 2.66-mile Talladega. It’s also notable for being the site of Dale Sr.?s last Cup Series victory back in 2000 and Dale Jr. holds the record for most consecutive victories there with four from 2001 to 2003.

When he announced he’d be wearing the camera, Earnhardt, Jr., who is winless this season, was pretty straightforward about the reasons.

?I also put that camera on my helmet so I?m wearing that helmet cam all weekend. I purposely asked for that helmet cam for the Talladega race because I imagine that it is going to hold me accountable and motivate me to be aggressive,? Earnhardt Jr. said during his weekly Dale Jr. Download podcast. ?I want to put some stuff on film that people are going to want to watch so between that and the fan support, I think we are going to be in the gas all weekend.?

With or without the camera, NASCAR fans will no doubt be cheering on the #88 car. Sunday?s race at Talladega is scheduled to begin at 2pm ET.