Dale Jr. tells us why he’s so motivated this weekend and what he’s doing differently 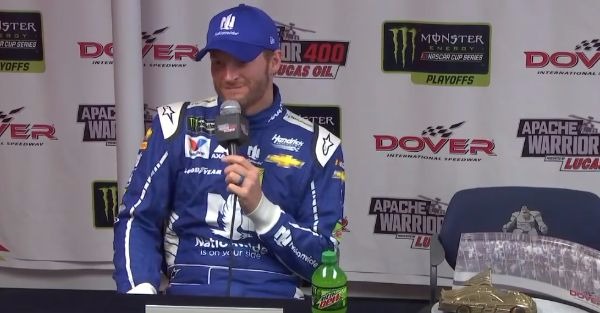 If you look up Earnhardt country in the dictionary, there should be a picture of Talladega Superspeedway.

Between Dale Jr. and the late Dale Sr., the father-son combo has collected 16 wins at the 2.66-mile track. Talladega’s also notable for being the site of Dale Sr.’s last Cup Series victory back in 2000 and Dale Jr. holds the record for most consecutive victories there with four from 2001 to 2003.

With their rich history at the track, Dale Jr. has made it known he wants to make it a memorable occasion for his fans during his final race at the superspeedway.

Dale Jr. is still without a win in his farewell season, but Talladega should provide a decent chance for him to find his way back to victory lane given his history at the track. Earnhardt Jr. also revealed during the podcast there’s another factor that’s motivating him to perform his best this weekend, according to Sporting News.

“I also put that camera on my helmet so I?m wearing that helmet cam all weekend. I purposely asked for that helmet cam for the Talladega race because I imagine that it is going to hold me accountable and motivate me to be aggressive,” Earnhardt Jr. said during his weekly Dale Jr. Download podcast. “I want to put some stuff on film that people are going to want to watch so between that and the fan support, I think we are going to be in the gas all weekend.”

Sunday’s race at Talladega is scheduled to begin at 2pm ET. Broadcast responsibilities will be taken care of by NBC.