These five drivers are poised to bounce back in 2018 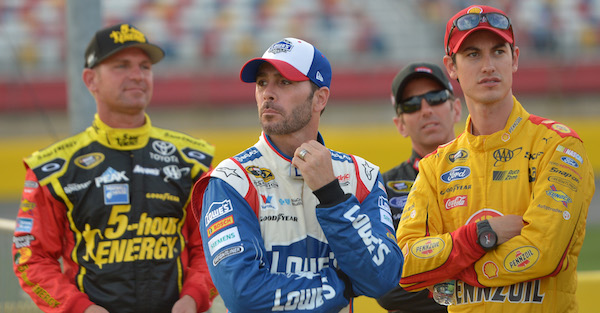 The 2017 season saw some NASCAR drivers skyrocket to success, while others slid well below their expectations.

Of those that didn’t quite finish were they would’ve liked to, Pete Pistone of mrn.com has selected a group of them that he feels will bounce back to the front in 2018.

RELATED: Here are the 5 NASCAR truck series drivers poised to break out in 2018

Joey Logano is coming off a lackluster year after finishing 17th in the points standings after finishing second in 2016 and introducing the world of NASCAR to the term encumbered. Logano failed an after-race inspection after taking the checkered flag at Richmond in the spring and never quite back on track the rest of the season. Some of the harshest penalties ever handed down by NASCAR didn’t make matters any better. If Logano can put last year behind him, there’s no reason he can’t move his way back to the front of the pack.

Kyle Larson is coming off a three-win season and an eighth place finish in the points standings. While most drivers would consider that to be a great year, it’s just the beginning for Larson. He had a rough stretch at the end of the year with finishes of 39, 37, 37, 40 leading up to the finale at Homestead. If not for that horrific run, Larson would’ve easily been in the Championship-4.  The sky is the limit for Larson in 2018.

Jimmie Johnson attempted to capture a record eighth NASCAR Cup Series championship, but fell short of his goal when he finished 10th on the year. Johnson’s 2017 campaign was the tale of two seasons. During the first half of the season he had three wins and 6 top-10 finishes, while the second half of the season saw him go win-less with five top-10’s. To see the 42-year-old come out and dominate en route to a record eighth title in 2018 would be the storybook ending to a career.

AJ Allmendinger had a year that he’d love to wipe from his memory. The 27th place finish in the points standings is nowhere near where JTG Daugherty Racing thought the driver of the No. 47 would finish. After a third place finish at Daytona to start the year, the rest of 2017 was downhill for Allmendinger. He only managed four more top-10 finishes in the remaining 35 races of the year. Hopefully a new year means more success for Allmendinger.

Elliott Sadler has been on the cusp of winning a Xfinity Series championship for the past seven seasons. During that span, he’s finished in the top-5 of the points standings six times, with four of those being second place finishes. Last year, Sadler fell just short of a title after battling with teammate William Byron to the final stretch of the race. Just before the end, Sadler was caught up in traffic before eventually crashing and missing yet another shot at his first title. While Sadler will be a favorite to capture the championship on the season, he’ll have plenty of competition as the field is stacked with talent.

Any of the above listed drivers are more than deserving of a championship on the year. But a record eighth for Johnson would be epic, and a first from a longtime veteran like Sadler would be huge.