Winning the Cup Series gives Martin Truex Jr. and Sherry Pollex a platform for a cause dear to them 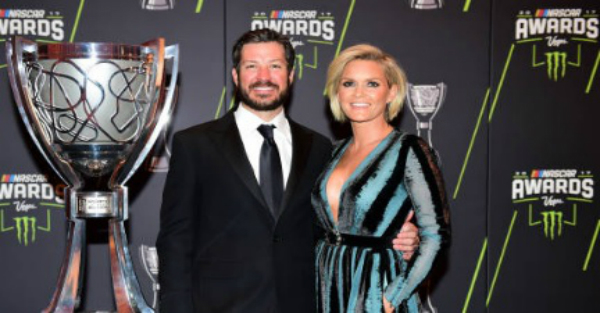 One of the benefits of winning the NASCAR Monster Energy Cup Series championship is the additional appearances and media obligations that come along with it.

Martin Truex Jr. won his first Cup Series title at the season finale in Homestead and by doing so is able to spread the word on a cause that’s close to him.

As many NASCAR followers may know Truex Jr.’s life-partner and long-time girlfriend Sherry Pollex has been battling ovarian cancer since 2014, according to ESPN.com.

While Truex was fighting his way to a championship, Pollex was fighting for her life as she underwent surgery in July, followed by chemotherapy treatments.

In some of the champion’s post-title engagements, Pollex has been by his side during some interviews. Recently, the couple were guests on Megyn Kelly Today, where they were given an opportunity to tell their story. Pollex knows it’s a perfect chance to aid in her efforts toward generating funding for research and treatment of ovarian and pediatric cancer.

“It did open up a whole ‘nother demographic for women that don’t know anything about my story and don’t know a lot about ovarian cancer and the work that we do with pediatric cancer, so it was really cool for us to be able to do that,” Pollex said.

Pollex had to postpone a chemo treatment to be by Truex’s side as he was honored by NASCAR in Las Vegas at the end of November. She admits the traveling was hard for her after attending the final two races of the season, the media tour in New York, and then the awards ceremony.

While the couple’s story may be familiar to followers of racing, there is a much larger audience that could still help as the word continues to spread.

“The work that we’ve done through our foundation has been amazing,” Pollex said. “Without NASCAR and this platform, I don’t think we’d be able to do any of that.