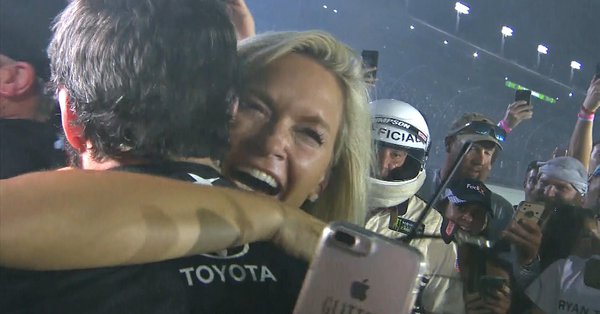 Martin Truex Jr.’s first championship was emotional for a variety of reasons, but the most emotional factor of the win was Truex saying he won the race for his girlfriend, Sherry Pollex.

Pollex has been battling stage III ovarian cancer, and she hasn’t been able to attend every race this year due to treatment. But she was there on Sunday when Truex won the title, and Truex said he won that race for Pollex.

Pollex was interviewed by Yahoo Sports after Truex’s win, and she said the Furniture Row Racing team as a whole has been through a considerable amount over the last year.

“This team has come so far,” Pollex said. “They’ve been through so much. They’ve taken so many punches to the gut with deaths they’ve had in their families and friends and crew members. Barney’s surgery and with my cancer, they battled right beside me. I think that’s just changed this team and who they are. It’s made them want to win so bad.”

Pollex said she thought Truex wanted to win the championship the most for his team at Furniture Row Racing because they’ve “done so much for him.” She said in 2014, the team couldn’t get out of its own way, and now they’re on the top.

But Truex also said he wanted to win the race and the championship for Pollex after everything she’s been through battling ovarian cancer.

Pollex said both she and Truex had to persevere through difficult times, and it makes her want to continue fighting so she can continue supporting him and vice versa.

There’s no question that Truex’s win was about as emotional as it gets in NASCAR, and it’s evident how much the win meant to both Truex and Pollex.