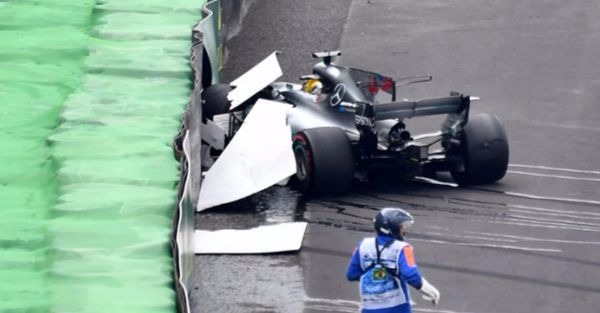 When Lewis Hamilton plans his vacation following the F1 season, it’s safe to assume that Brazil will be the last place he’ll want to visit.

Earlier this week, several of his team members were held up at gunpoint after leaving the track in São Paulo, as three armed criminals robbed them for their personal belongings.

Now–with the 2017 F1 championship already sealed–Hamilton had a uncharacteristic problem in qualifying when he lost control of his Mercedes and hit the outside wall. While Hamilton was okay after the wreck, the same couldn’t be said for his race car. Needing a new internal combustion engine, turbocharger, and MGU-H, Hamilton will start the Brazilian Grand Prix from pit road for making alterations to the car under parc ferme conditions.

On the season, the 32-year-old Hamilton has nine wins, 11 poles, and 12 podium finishes, but he’ll have his work cut out for him if he hopes to maintain his 100 percent points-finishing record in 2017.

“I take so much pride in my commitment and how I drive and I’ve not made any mistakes all year. It’s been a long time since I put the car in the wall,” Hamilton said, according to RACER. “But it happens and once it happens there is no point in dwelling