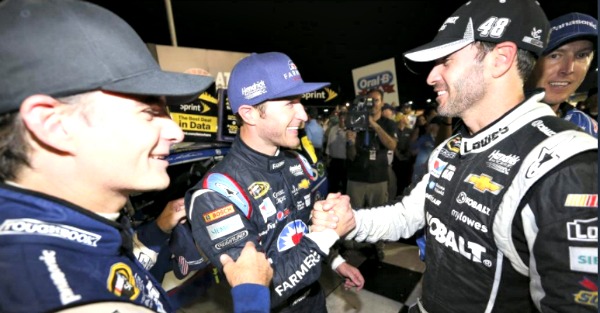 Hendrick Motorsports has vowed to help Kasey Kahne fine a ride in 2018, and ESPN, in a tweet, is reporting on one possibility.

from my 2018 chart: hearing Kahne could be heading #95 LFR w/alliance from HMS. McDowell could move to FRM in #34 #NASCAR, rumor for now

That would be the Leavine Family Racing No. 95 Chevy SS currently driven in the Cup Series by Michael McDowell. The tweet makes mention of an unspecified alliance with Hendrick, which makes some sense. As per the report, McDowell could then move to the Front Row Motorsports No. 34.

Leavine is a small operation that features the single car, so it is a bit surprising Kahne would go there. But if he wants to keep racing — and he gets support of some kind from Hendricks — then the move would be good for all parties.

Kahne is in a very good spot for 2018 because AutoWeek is reporting the Hendrick Motorsports will pay Kahne for 2018, even though he’s been released from his contract.

Not only that, team owner Rick Hendrick has already pledged to help Kahne find a ride in 2018, with GMS Racing a possibility.

No wonder Kahne is so grateful.

“To have (Rick Hendrick) behind you is a really good thing,” he told ESPN. “I respect that. I respect him a ton.”

Kahne has already said he’ll only race in the Cup series moving forward.

Kahne, who was released by Hendrick Motorsports in favor of 19-year-old William Byron, said he knows securing a ride in 2018 will be hard, but is very grateful for Hendrick’s support.

?I?m also trying to help Kasey in another situation that we could be involved with in helping another team.?

?I?m not going to mention the team, but I know there are several situations that we?re talking to, kind of an alliance, which would be good for everyone. We?re working on it. We?ve been working on it and we?ll just see how it develops.?

Kasey has worked extremely hard. He?s a tremendous teammate and person, and he has been totally dedicated to our program since day one. I?ve always believed that he?s a special talent, and I know he will thrive in the right situation. We will do everything we can to finish the season as strong as we can.

I?d like to thank Rick and everyone at Hendrick Motorsports for their hard work and dedication, along with providing me a great opportunity and success over the last six years. We won six races together and I?m coming off of one of the biggest wins of my career at the Brickyard, which has given the (No.) 5 team a lot of momentum heading into the playoffs. We still have a lot of racing left in 2017 and finishing strong is our top priority. I look forward to what the next chapter in my career holds.

Kahne has driven the team?s No. 5 Chevrolet for the least six seasons. In his Monster Energy NASCAR Cup Series career, he?s won 18 times with 174 top 10 finishes.

Advertisement
Kahne was only the latest big name driver to sever ties with his team. Stewart Haas Racing has announced it won?t renew Kurt Busch?s deal, and might cut ties with Danica Patrick. Matt Kenseth, a former Cup Champion, won?t be retained by Joe Gibbs Racing.