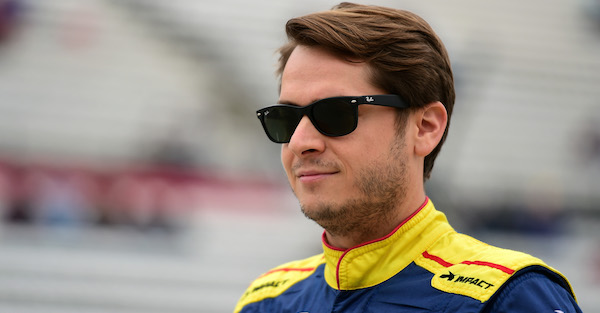 Landon Cassill still doesn’t have a ride for 2018, but the Cup Series driver has indicated that he’ll race just about anything to get back on the track this season.

Cassill was asked by fans if he’d consider racing in the Xfinity Series or the Truck Series, and responded with a picture of an Oscar Meyer WeinerMobile to indicate he’d race anything. Fans sent tweets and memes to Cassill regarding what all he’d race in, and he retweeted some of them on Wednesday.

People: Do you think you'd be willing to run Xfinity or the truck series?

People: Do you think you’d be willing to run Xfinity or the truck series?@landoncassill: pic.twitter.com/Ct48CGsXEl

Related: An unemployed Cup Series driver sends a cryptic message about his future

People: Do you think you’d be willing to run Xfinity or the truck series?@landoncassill : pic.twitter.com/oJgyT6yJLp

Do people think Landon would be willing to run Xfinity or trucks?

Cassill would even race in the Mystery Machine. Not sure if Scooby would be allowed to race with him or not.

People: Do you think Landon would be willing to run Xfinity or the Truck Series?

Cassill is more active on Twitter than just about any other driver, and he’s worth a follow from racing fans. It’s unclear if a team will give him a chance next season, but he’s made it clear he’d be willing to race in just about any series.

Cassill raced full-time in the Cup Series the last two year for Front Row Motorsports, but his contract wasn’t renewed for the No. 34 car for 2018. His best career finish in a race was a 4th-place run at Talladega in 2014.