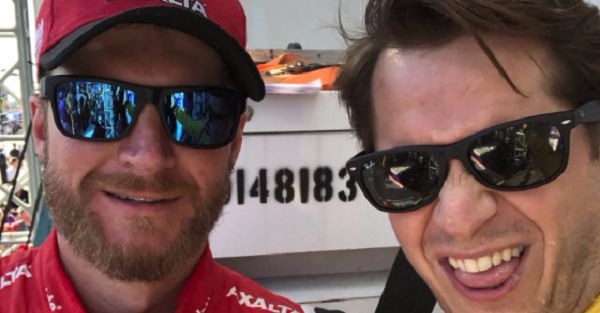 Earlier this year, veteran driver Landon Cassill was informed by his NASCAR team that he would not be returning to the No. 34 Ford Fusion in 2018.

This made the 28-year-old Cassill a free agent, along with a number of other big-name drivers like Matt Kenseth, Danica Patrick, and quite possibly Kurt Busch.

While Kenseth and Patrick have both announced their plans for next year, the future is unclear for Cassill. While he has plenty of NASCAR experience-having made 259 starts in the Cup Series–the results just haven’t been there. He only has one top-10 finish in Cup, according to Racing-reference.info.

So, with his future up in the air, Cassill turned to social media to provide an update.

People: Do you think you’d be willing to run Xfinity or the truck series?

As you can see, Cassill himself brought up the idea of competing in the XFINITY or Truck Series in 2018 and included an image of the Oscar Meyer Wienermobile. While Cassill is the only person who truly knows what this means, it could be inferred that he’s willing to drive anything he can next year.

For his part, Cassill has a strong presence on social media and is known for working well with sponsors. This year, he told his Twitter followers to take pictures of themselves whenever they visit a Love’s Travel Stop, asking where Cassill is and then he would retweet the image. This level of fan engagement has inspired the #HireLandon hashtag.

If all else fails and Cassill isn’t able to find a ride in 2018, he might have a career waiting for him as a social media manger.