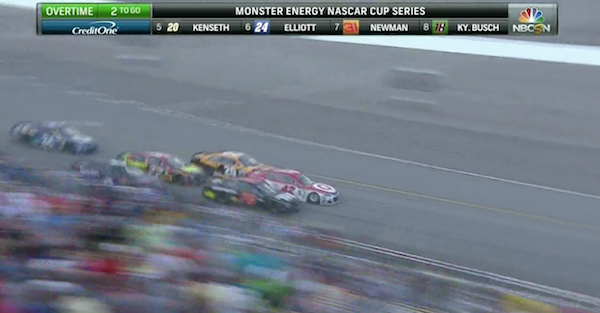 Larson joined Jimmie Johnson and Martin Truex Jr. as the only drivers this season with at least three wins.

Related: Miscommunication sent a playoff eligible driver to the back of the field

Larson took over after the restart, and he built a big enough lead over Martin Truex Jr. and Erik Jones that he started to celebrate early.

Related: Kyle Larson got his wish but couldn’t deliver

Larson won the race a day after finishing second in a sprint car race in Iowa on Saturday night. He said after the win that he couldn’t believe he won because he had struggled all day.

.@KyleLarsonRacin is pretty pumped! He caught up with @RutledgeWood after his sick burnouts! #NASCARonNBCSN #PureMichigan400 pic.twitter.com/Kx0UOepPJm

“I can’t believe that happened,” Larson said. “We were struggling all day. Definitely not as good as we were the last few times we won here. We persevered and had some great restarts there at the end.”

Larson added that it was a week he will never forget.

With the win, Larson moved up to second in the points behind Truex. Kyle Busch fell to third.