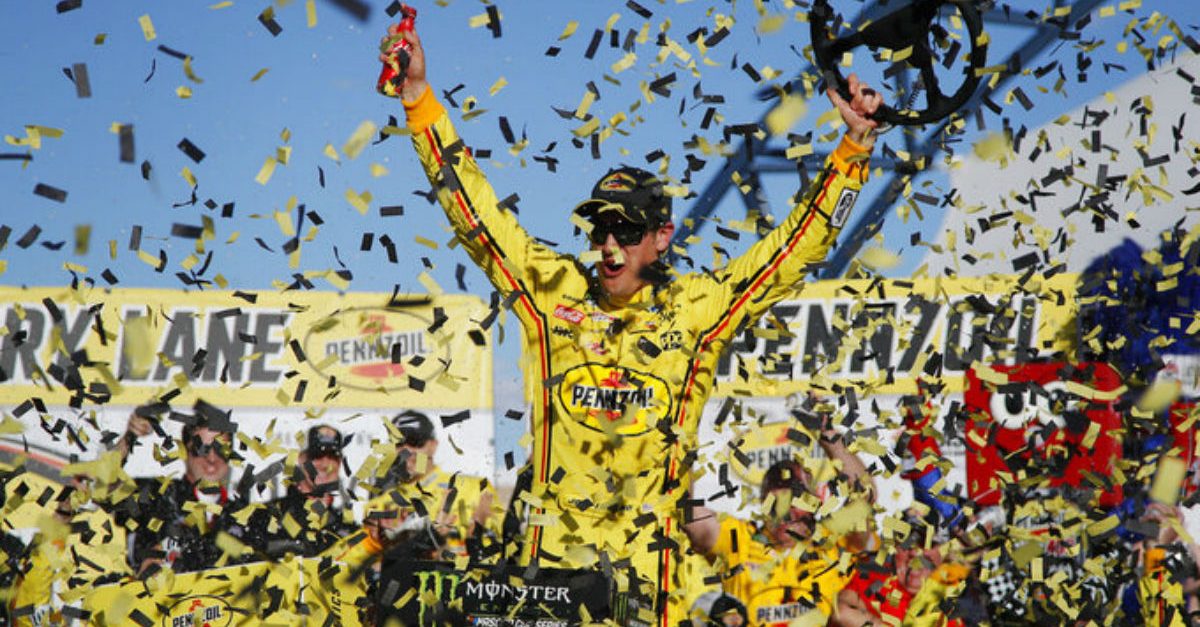 LAS VEGAS (AP) ? Joey Logano and Brad Keselowski were side by side off the fourth turn, two teammates fighting for the last burst of speed on the final lap at Las Vegas Motor Speedway.

Logano barely managed to block Keselowski’s move, and the defending NASCAR Cup Series champion hung on for his first win in his title defense season.

“That was more intense than I wanted it to be,” Logano said.

Logano held off Keselowski on Sunday for his first Cup victory in Vegas, driving his Team Penske Ford to his 22nd career win.

“There’s been plenty of times here when we’ve led a lot of laps here, but we’ve never won, and that’s the most important stat to have,” Logano said. “Something happens at the end, and Brad becomes the fastest car and he wins. I looked in the mirror, and I was like, ‘Oh my gosh, this is happening again.'”

“What a great race,” Logano said. “Brad and I were so evenly matched, and you just can’t pull away (under the new rules). My heart is still running.”

Excitement is exactly what NASCAR got on the final lap, although the quality of the 266 laps before that sharply divided drivers and observers ? no surprise in a sport that rarely agrees on much of anything.

The Vegas race featured no cautions, which meant the thrilling restarts expected under the new rules were limited to a couple of wild laps after the two segment breaks.

“There towards the end, the way this drafting package, these rules work, it was intense,” Logano said. “You can’t get away. You’re constantly looking around. Mentally, I’m exhausted right now. … It proves you don’t need crashes to have an exciting race. There’s so much strategy that goes into driving these race cars now. I thought it was as entertaining as can be. I don’t really know what to say if you don’t like that.”

Keselowski drove up from 19th to take the lead with 27 laps left, but his hopes for back-to-back victories were dashed when Logano passed him while getting held up by lapped traffic.

“I’d like to have one more lap,” said Keselowski, who won the playoff race in Vegas last September. “It was a good battle, and we were both fighting really hard at the top. It seemed like it came down to what the lapped cars were going to do.”

Kyle Busch finished third, unable to recover from a mid-race speeding penalty in the hometown driver’s quest for the third three-race weekend sweep in NASCAR history. As you might expect, Busch wasn’t a fan of the new rules’ effects on his racing.

“The cars don’t have any speed,” Busch said. “You’re wide open just trying to catch a draft. You couldn’t maneuver. You’re always trying to figure out which way to go.”

Here are more things to know from the race in Sin City:

Kyle Busch won the Trucks race Friday and the Xfinity event Saturday, giving him 197 victories in all three series. But he has won only one Cup race in Vegas, and he owned his mistake when he failed to complete the triple.

“If we didn’t have the speeding penalty on pit road, we would have won this race,” Busch said. “The driver threw it away.”

Roger Penske’s team has won two of the first three races, and the 82-year-old owner is encouraged by the early results from the new package, and not just because Logano won.

“To me it shows that you can be the leader, but also you can be behind and catch up,” Penske said. “I’m maybe biased, but so far, so good.”

Penske also wasn’t worried when his two drivers were inches apart on that final lap: “We’ve really told them to take care of each other, and the last 10 laps, the best man wins. I’ve seen it all over the years with teammates racing each other. On the one side, you worry a little bit, but on the other side, boy, isn’t that great?”

Logano moved into the overall series points lead, jumping two points ahead of Kevin Harvick. Logano, who finished fourth at Daytona, had never won a Cup race at Vegas in 11 tries during his first 10 full-time seasons, although he won an Xfinity Series race at the track in 2017.

Seven-time series champion Jimmie Johnson finished 19th, and he sits 18th in the overall points. That’s last among the four drivers from Hendrick Motorsports, which isn’t off to a dynamite start to the season.

At ISM Raceway in Phoenix on March 10 as NASCAR’s West Coast Swing continues.

Read More: NASCAR Champion Joey Logano Insists That He and His Team Are ?Back at Zero with Everyone Else?