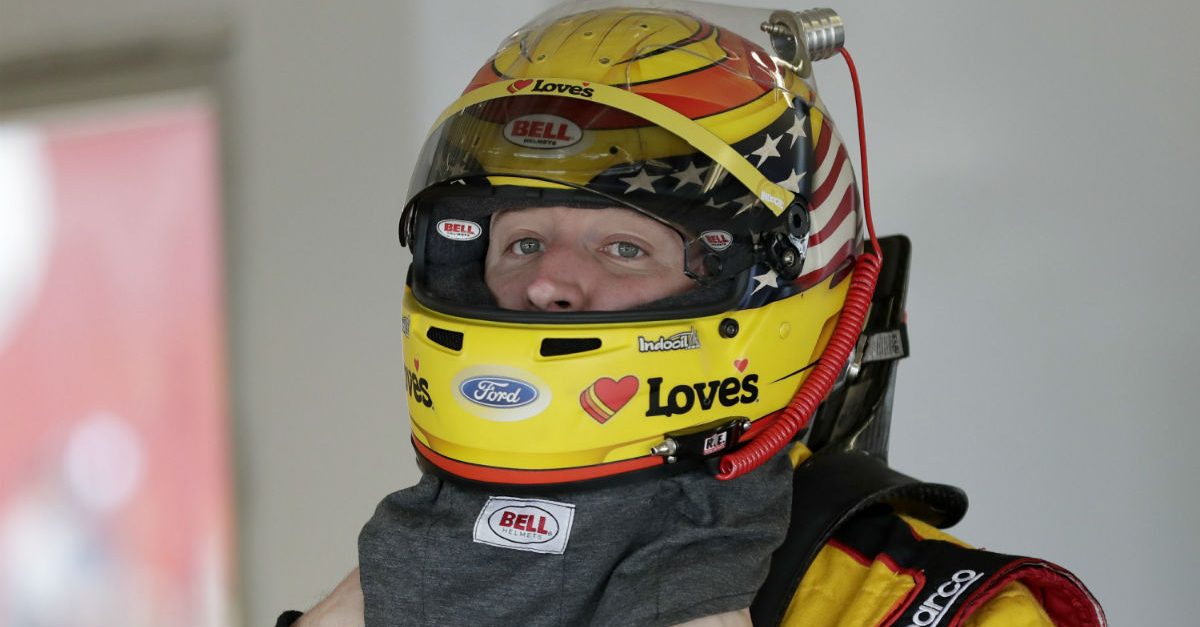 CHARLOTTE, N.C. (AP) — Michael McDowell was still digesting his fifth-place finish at the Daytona 500 when Joey Logano appeared at the front of his car, angrily pointing at the Ford logo.

He was questioning McDowell’s loyalty to the brand.

“He shows up pointing at the Ford emblem, pushing on the Ford, making his point ‘Hey, you are a Ford driver, why didn’t you push me?’” McDowell told The Associated Press on Tuesday. “It’s a two-way street, and if I got out of the car and started screaming at Joey for not going with me, everybody would say I was ridiculous and that I don’t belong up there and am not fast enough. God forbid I don’t push him to a win, now I’m the bad guy.”

There has been a lot of chatter the last few days about the #Dayonta500 This covers my thoughts and prospective of our Top 5 finish and late race drama. https://t.co/YIjG2XrJ12

The tension between a pair of Ford drivers is the fallout from a disappointing Daytona 500 for the blue oval brand. The manufacturer debuted its new Mustang at Daytona International Speedway and positioned its stable of drivers as heavy favorites to win “The Great American Race.” Most manufacturers align their teams to work together at Daytona and Talladega with the goal of getting one of their drivers — doesn’t matter who — into victory lane.

Ford fell short in the final overtime sprint to the checkered flag on Sunday, perhaps because McDowell made a lane change that separated him from Logano. Both drivers were trying to win, yet both probably needed to work together to have any chance at catching winner Denny Hamlin. Instead, Ford wound up locked out of a Joe Gibbs Racing and Toyota podium sweep. Logano finished fourth ahead of McDowell.

McDowell didn’t want to hear about brand loyalty in the aftermath of the race: “I just told him that my team doesn’t pay me to push Joey Logano to a win.”

Felt like we had the car to beat all weekend…not the end result we wanted but our 22 team has good momentum and a lot to look forward to in 2019. Congrats to @dennyhamlin getting the win for JD #Daytona500

McDowell is winless in 286 Cup starts since 2008 and doesn’t drive for one of NASCAR’s superstar teams. He moved last season to Front Row Motorsports, one of NASCAR’s smaller teams, and managed one top-10 finish but was tied for a career-best 26th in the final Cup standings.

“I don’t have many chances to win races,” McDowell said. “I have maybe four or five shots a year to try to win a race. These other guys, they have 35 more chances. I needed to take my chance to win a race.”

Logano is NASCAR’s reigning champion and a former Daytona 500 winner.

So when McDowell found himself lined up with the leaders in the closing laps of the Daytona 500 he was racing for the victory with no time to consider team alliances. He pulled out of the bottom lane, away from Logano, and tried to hook onto Kyle Busch in the top lane. The move hampered Logano’s shot to catch Hamlin for the win.

McDowell has watched replays, spoken with Logano and Ford executives, and said he now realizes his best bet for a win would have been staying in line behind Logano.

“You’ve got a split-second decision to make a move and I had the momentum and thought it was best to go the outside and thought that was the right move,” McDowell said. “Looking back at it, if I could do it over again, the bottom would have been better for me.”

He remains adamant it was not his responsibility to help Logano win.

Teamwork between manufacturers can work, but often depends on where drivers fall in the alliance.

Team Penske and Stewart-Haas Racing are the big shots at Ford. McDowell and the Front Row Motorsports group seem more like distant cousins. McDowell said he, David Ragan and their teams were not privy to the Penske and SHR pit strategy at Daytona; SHR driver Clint Bowyer weaved around McDowell late in the race, a move that dumped McDowell into a slower middle lane, then cut McDowell off to create another late multi-car accident as Bowyer tried to force his way back into line.

“Those guys don’t work with Front Row Motorsports at all,” McDowell said. “They don’t help us at all. They want us to be there to support them when they need it, but they don’t let us in on when they’re going to pit, they don’t share strategy, they don’t tell us what’s going on. And so my frustration with Joey is, ‘Don’t come to me talking about brand loyalty when you guys don’t do nothing to help us. And you want me to help you when you don’t do anything for us?’”

McDowell’s finish at Daytona was a career best and he is ninth in the Cup standings as NASCAR shifts to Atlanta Motor Speedway this weekend with a new rules package that is designed to tighten the on-track competition. The idea behind the rules is to slow the cars to keep them closer together and improve passing opportunities.

If it works, then drivers like McDowell might be able to consistently compete with the big teams. McDowell has seven career top-10 finishes, all but one was at either Daytona or Talladega.

“If this package races like Daytona and Talladega, I’m going to be in a great spot,” McDowell said. “Hopefully we can have some highlights and put ourselves in a position to make some noise.”