After making a supplier switch, a racing director says the old engine was holding them back 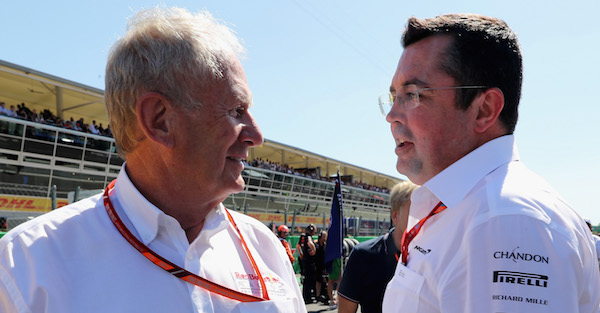 McLaren’s partnership with Honda hasn’t exactly yielded positive results in recent years, and the team decided to make a switch to Renault for next season and beyond.

McLaren racing director Eric Boullier said he was concerned before the season that members of his staff would leave after noticing how much the team would struggle for the third straight year with Honda.

“I went to the management, showed them the data and told them that we cannot accept another year like this,” Boullier said via AutoSport.

“We had a tough first year with Honda, we had a tough second year, and had expected progress good enough to get us back to where we belong ? but Barcelona showed that we would go backwards and that was absolutely not an option.”

Honda had made changes to its engine design heading into the 2017 season, but there was still a problem with the oil system. McLaren decided to part ways with Honda, and they will partner with Renault next season.

“I obviously warned them about the consequences of another year of no results, where you keep everybody afloat,” Boullier said.

“We have a new team, which has been reconstructed in the last three years: new people, very good new people ? competitive people who used to win – and the danger was we’d lose them.

“The perception of a team is still very much based on drivers, because they are the faces of the team, but for me the real danger was losing those people.”

Fernando Alonso finished the highest of any McLaren Honda driver, and he ended the year 15th in the standings with zero victories.

Boullier is hoping the change to Renault will result in a much better and more competitive season for McLaren for 2017 and beyond.