Dale Jr. revealed his prized NASCAR collectible and asked fans for theirs. The responses are flooding in. 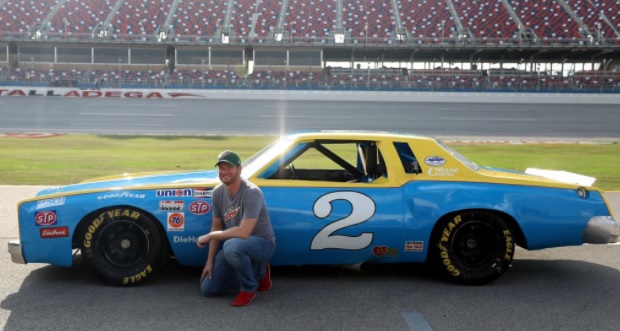 There are a lot of  sports fans that also double as collectors of memorabilia, whether it be one piece or 100.

Even some athletes also double as fans and collectors and Dale Earnhardt Jr. just happens to be one of them. Earnhardt took to Twitter to share his favorite collectible and ask fans to share pics of theirs.

Dale Jr. posted a photo of Dale Earnhardt Sr.’s 1980 championship winning Chevrolet Monte Carlo, which was given to him by officials at Talladega just days before he ran his final race at the legendary track.

To all you collectors of sports and racing memorabilia, Im curious. How about photo evidence and description of your most prized collectible or autograph? Mine is my fathers 1980 championship winning car. pic.twitter.com/JGD1LQtdom

There was no shortage of fan submissions as they poured in. With anything from signed insulin to autographed signs, people put their keepsakes on display for all to see.

last year at the pocono indycar race, @charliekimball signed my insulin. he was super nice and its cool to see someone being able to win races with the same disease you have pic.twitter.com/GSVG9WarWe

The hat that @keselowski came into the stands and gave me after his Martinsville win. Got it autographed in October and have since added the M’ville raced win diecast. pic.twitter.com/PGSUEy1DNK

Mine is a mint edition poster from the 1977 USGP signed by Mario, Michael and Marco Andretti as well as an unused ticket from qualifying. pic.twitter.com/TSOV9UfdaZ

I bet blaney to win pocono. Blew up photo of ticket, asked him to sign it here in Vegas for champions week. He asked me for a cut. Broke a long dry spell and gave me a great story. pic.twitter.com/CLOvf58N0L

My pinewood derby car I got signed by your dad. First thing he asked me when I handed it to him was if it won. pic.twitter.com/qbwWnAwYE9

Mine is my first car I bought with my own money which is the tribute car you did for your dad and the first car my fiancee bought me. Both got autographed at your last race @TXMotorSpeedway pic.twitter.com/rgARhUcgCc

This is the Daytona starting grid. 4 feet high. Signed by each individual driver. pic.twitter.com/rMvfpuchHc

It was definitely an interesting group of submissions, with some of them being memorabilia from both Dale Jr. and Dale Sr. That’s one of the greatest parts of NASCAR or racing in general. The relationships between the  drivers and their fans is second to none.