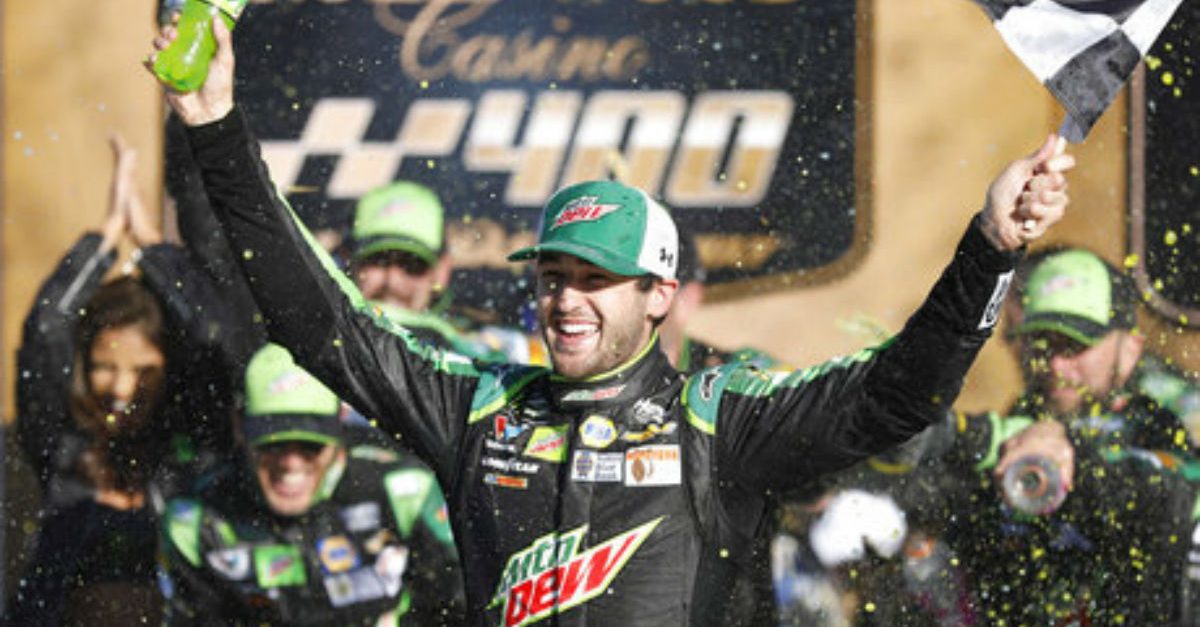 KANSAS CITY, Kan. (AP) ? Chase Elliott first had to figure out how to win at NASCAR’s top level. Now that he’s got that handled, the son of 1988 champion Bill Elliott is chasing a title of his own.

Elliott won at Kansas Speedway on Sunday for his second victory in three races, cementing himself as a title threat late in a season in which mighty Hendrick Motorsports has lagged. He needed 98 career starts and maybe a dozen near-misses before he finally closed out his first Cup victory.

The breakthrough victory 11 events ago sparked Elliott’s performance in NASCAR’s playoffs, the second round bookended by a pair of Elliott victories. Elliott opened the round with a win at Dover and closed it with the Kansas victory.

“We’re going to keep the hammer down,” Elliott said. “I feel like we are among those guys that you have to beat, and I think that is all you can ask for.”

Elliott is the only Hendrick driver and single Chevrolet representative in the round of eight. Hendrick teammate Jimmie Johnson, a seven-time champion, was eliminated in the first round of the playoffs and Alex Bowman was knocked out Sunday.

Also eliminated Sunday were Team Penske teammates Ryan Blaney and Brad Keselowski, both winners in the first round of the playoffs, and Kyle Larson.

Larson needed to win to make it into the third round and was frantically chasing Elliott in the closing laps but settled for third. He was docked 10 points by NASCAR earlier this week for an infraction at Talladega, his team lost two appeals of the penalty and he was in a must-win situation at Kansas.

“I’m actually glad that nothing stupid took us out of the playoffs this year ? we had that battery come out at Dover a couple years ago, blew up an engine here last year,” Larson said. “I would have liked to have made it into the next round, but I’m glad (elimination) wasn’t anything other than just us not performing where we needed to be that kept us out of the next round.”

Stewart-Haas Racing has all four of its cars in the round of eight and Ford has five of the slots. Toyota has two entrants in Kyle Busch and defending series champion Truex. Elliott is the only representative from Chevy and Hendrick, which has struggled this year with a new Camaro and a young driver lineup.

NASCAR’s so-called “Big Three” of Harvick, Truex and Kyle Busch are still in the playoffs. Harvick, winner of the second stage Sunday, and Kyle Busch, the runner-up to Elliott, have looked like championship contenders all season. Truex has been hot in spurts but was fifth at Kansas, where he swept both races last season.

Read More: Here?s What a Few NASCAR Stars Had to Say About the 2019 Cup Series Rules Changes

He's got two wins in the Round of 12!@chaseelliott has a message for his fans as he gets ready for the Round of 8. #di9 pic.twitter.com/kxXi3T4wSV

“This stuff is hard man. It shows how difficult it is you know to win both races here last year and run second in the spring and then come back trying to be better and struggle all day,” Truex said.

Keselowski briefly flirted with a title run by reeling off three consecutive victories, but he ran out of gas last week when Talladega went into overtime and it crushed his momentum. He was sixth Sunday.

“We needed something to step up, but it just wasn’t there,” Keselowski said. “I am proud of what we did down the stretch of the year. We won three races … but of course the ultimate goal is to win a championship and we won’t have an opportunity to do that this year.”

Elliott has now taken over Keselowski’s slot as a late challenger to the “Big Three.”

“This is a huge time of year. We’ve got a lot of work to do and a long ways to go,” Elliott said.

RULING EXPLAINED: One of Bowyer’s tires appeared to roll to the edge of his pit box during a late stop but he was not penalized for what many thought was a violation. Had Bowyer been penalized, it might have helped Blaney avoid elimination.

NASCAR said after the race Bowyer’s tire was under control until it was brought inside the pit stall, and the rule states tires can cross into the adjacent pit boxes on the inside as long as they do not impede another car or go past the halfway point of the adjacent stall. Had a car been pitting in front of Bowyer, or if the tire had rolled past the pit stall number painted on the wall, it would have been a penalty.

ENGINE ISSUES: William Byron was knocked out of the race with an engine failure 55 laps into the race. A day earlier, Jamie McMurray had an engine failure during practice. Both engines are built by Hendrick Motorsports and neither driver is in the playoffs.

Dale Earnhardt Jr., a former Hendrick driver, opined in the NBC Sports broadcast booth what many wondered: The Hendrick engine department may have used Byron and McMurray’s motors for research and development purposes.

UP NEXT: The opening race of the third round of the playoffs, at Martinsville Speedway on Sunday. Kyle Busch is the defending race winner, while Bowyer won at Martinsville earlier this year.