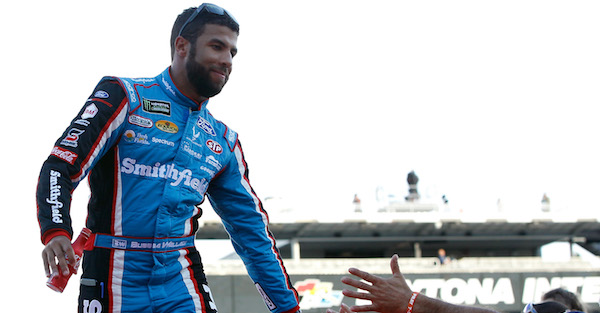 Bubba Wallace is the latest driver to take part in the #MotorsportChallenge, which stems from the new Migos song, “Motorsport.”

Wallace posted a video of him dancing along with the song after he was challenged by Austin Dillon.

Couldn't let @austindillon3 call me out for the #MotorSportChallenge, and not respond. Hey @Migos, check out those moves…@Blaney, you're up. pic.twitter.com/xlRSHpWBr1

Related: Bubba Wallace asks fans to caption his photo, and they jump in

Wallace challenged his friend, Ryan Blaney, to do the same. But Blaney tweeted that he will “respectfully decline” the challenge so his fans can’t see his dance moves.

What is everyone else taking to the Daytona 500?
@BubbaWallace, @tydillon and @JimmieJohnson let’s see yours! @Migos understands. . . . #MotorSportChallenge #Daytona500 #Migos pic.twitter.com/ZYD8j8x4l2

We’ll have to wait and see if anyone else accepts the challenge or if they decline to invitation like Blaney did.