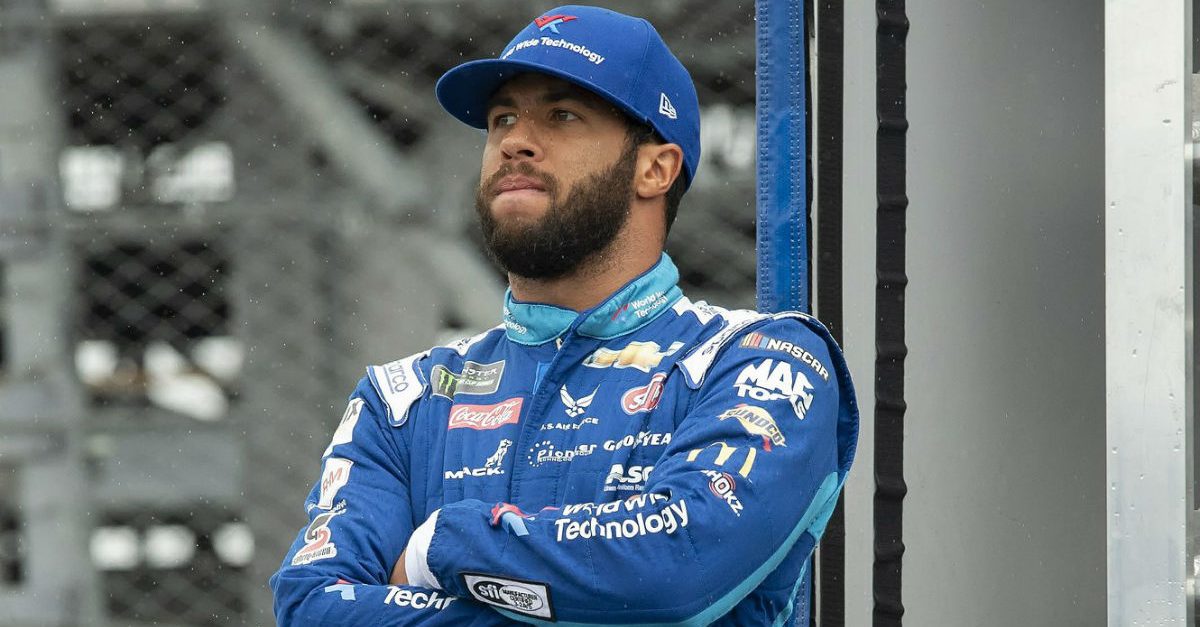 The death of George Floyd at the hands of a former Minneapolis police officer is just the latest in a slew of incidents that have spawned protests and heated discussions over police brutality and racial injustice throughout the country. NASCAR driver Bubba Wallace cares deeply about these issues, not only as one of the most successful African-American drivers in NASCAR history, but also as someone who has personal traumatic experiences involving law enforcement.

On an episode of the Dale Jr. Download, the driver of the No. 43 Richard Petty Motorsports Chevrolet shared the story of a cousin who was killed in a police shooting at a basketball tournament in Tennessee, when Wallace was only nine.

“I was running around the gym with all the brothers and sisters there and all of a sudden I hear a scream like the worst scream that you want to hear, not like somebody scared you straight, like something bad had just happened. I look over and I see my mom running out the door and we had just found out that my cousin was shot and killed by a police officer. Unarmed.”

“And so I was young. I didn’t understand it. We lost a family member. But now seeing everything come full circle, I totally get it now.”

A new @DaleJr Download with @BubbaWallace is available now.

The 26-year-old Mobile, Alabama native added that the shooting stemmed from a white store clerk feeling threatened by a group of black people. In the end, a judge cleared the officer in the shooting, and Wallace’s family lost a wrongful death lawsuit against the city of Knoxville.

“They had just left somewhere — a football game or something. He was [19], and they all went to a gas station here in Knoxville, Tennessee. Playing loud music, it was a whole crowd, a hang-out spot. … But the store clerk, who happened to be white, felt threatened that there was more African Americans and that something bad was going to happen. So she called the cops, and the police officer had ordered my cousin, Sean, to put his hands up, and he did.”

“And then that officer walked away, and [my cousin] went to grab his phone to call his mom because he was scared and was shot and killed from the other police officer. And it’s like all because people were having a good time, not bothering somebody but somehow, people are afraid. Why are you afraid of black people? That’s just the thing I don’t understand. Like, we’re minding our own business, we’re having a good time, and somebody’s life was taken, and it happened to my family member. And I’ve never shared that story.”

“I remember in fourth grade, I was crying, I had gotten let out of class for it. But now, truly understanding it, it definitely hurts a lot more now that I can decipher what really went on into it. [They] said he was reaching for a gun and he wasn’t. So that’s tough. I’ve dealt with that. That’s indirectly, but it’s family.”

Wallace, who also dished on the fatal shooting of jogger Ahmaud Arbery in Georgia and NASCAR Cup Series driver Kyle Larson’s use of the N-word during an iRacing stream, also shared how he himself has been profiled by the police.

“I’ve dealt with my struggles, you know, directly of getting pulled up at stoplights … and having guns drawn — not pointed at me but they’re out of their holster ready to do something. And that moment, being pulled out in front of and turning on your hazards is a sign that you’re slow and I need to go around you. But when it’s undercover cops, you can’t do that. And when it’s tinted windows, they don’t know what to expect, so they’re ready for anything. So one wrong move, I wouldn’t be here talking to you today.

“And then the comments after — and this is where we can help so many people — it’s the comments that they made towards me that piss me off the most. ‘Can you afford this car? This is a nice car.’ And I said, ‘Yes, sir, I can.’

“And what I wanted to say is, ‘Yeah, I’ll have you one here Monday, I’ll have your momma here one on Tuesday and I’ll have the rest of your family [one] here on Wednesday because that’s how much money I make.’ But I didn’t. I let it go because one wrong move, because I’m black, could have had me on the pavement saying, ‘I can’t breathe.’”

To the ones that believe we’re trying to throw black vs white at them.. open your eyes..😤

While Wallace has been the most outspoken NASCAR driver in the wake of George Floyd’s death, a number of drivers, team owners, and members of the NASCAR community have taken to social media to voice their outrage in the aftermath.

Chase Elliott, Ty Dillon, Daniel Suarez, Jimmie Johnson, Ryan Blaney, Tyler Reddick, and Brad Keselowski are just a few of the drivers who have used their platform amid the turmoil.

I want to let everyone know out there, I hurt with you and I stand with you. #BlackLivesMatter #ICantBreathe #GeorgeFloyd #JusticeForFloyd #SystematicOppression pic.twitter.com/45HSXYvwlP

It hurts to see our country being torn apart by racism and hate. While I can’t ever pretend to understand what black men and women have experienced, I can speak out against it and condemn racial inequality. I am hopeful in these moments that our love for all mankind can prevail and help us make the changes to build a better future for our children.

WATCH: The Story Behind The Most Evil Car in the United States