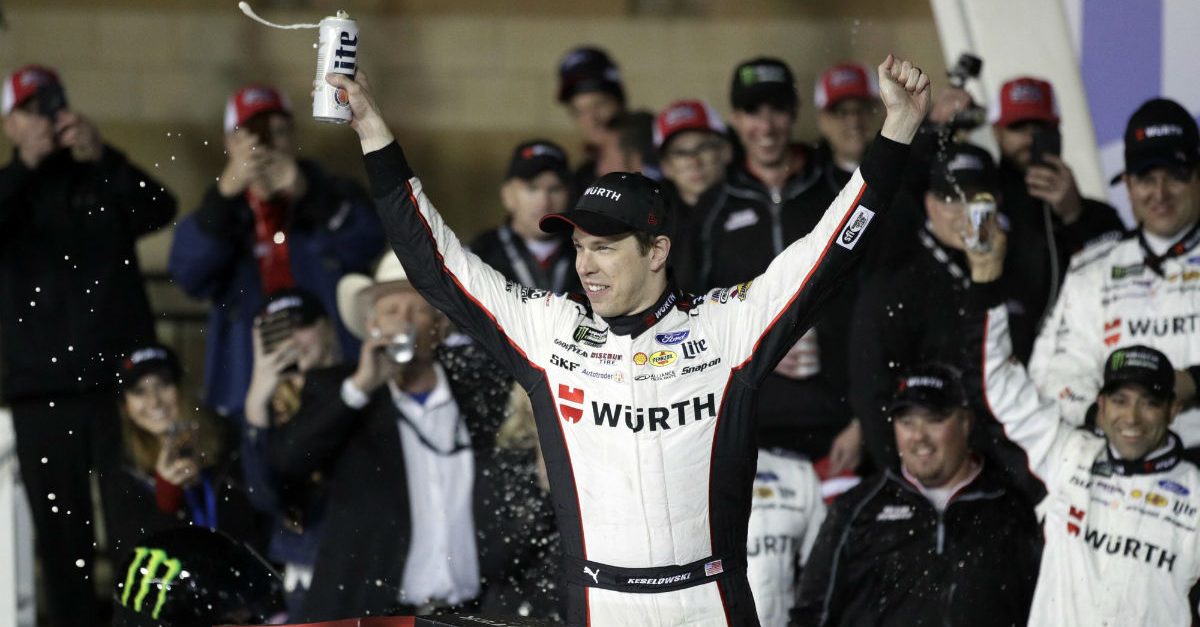 KANSAS CITY, Kan. (AP) ? Brad Keselowski had planned to head to St. Louis after the NASCAR Cup Series race at Kansas Speedway to visit Mike Mittler, a longtime Truck Series owner who helped him early in his career and had been battling cancer the past couple years.

But, after Mittler died Friday night at the age of 67, Keselowski headed to victory lane instead, capturing the checkered flag Saturday night and dedicating the win to his friend and mentor.

?He helped a lot of guys in their career. Just a huge loss for the NASCAR community,? said Keselowski, who held off Alex Bowman and a charging field in overtime for his third win this season.

?One of those unsung heroes,? Keselowski added. ?Gave his whole life to this sport.?

Mittler would have liked the hardscrabble way Keselowski won at Kansas.

He dealt with balance problems early in the race, never really contended with the faster cars of Kevin Harvick and Kyle Busch through the first couple of stages, yet managed to get everything sorted out in time to give Team Penske a satisfying Saturday sweep.

Simon Pagenaud won a wet and wild IndyCar Grand Prix in Indianapolis earlier in the day.

Bowman finished second for the third straight week, while Erik Jones triggered some bad blood with Kansas native Clint Bowyer by making an aggressive move that allowed him to hold onto third.

?I think it was just racing,? Jones said with a shrug. ?We were racing hard. This pack really leads to a lot of protecting your position. I?m not going to give up three or four spots.?

Elliott dominated long stretches of the race before losing the lead to Ricky Stenhouse Jr. with 22 laps to go. But after his car failed inspection twice and Elliott had to start at the back, he still managed to work his way to the front for his third consecutive top-five finish.

Bowyer rounded out the top five, though his run-in with Jones left him in no mood to celebrate.

The big question coming into the race was how NASCAR?s new rules package would fare, especially after it was panned by drivers and owners alike this week. But with an overcast sky and cool temps, the package wound up producing arguably the best race of the entire Cup Series season.

Harvick dominated early before a flat right tire with 90 laps to go got him out of pit sequence. Busch then pulled into contention and was challenging for the lead when a caution came out for Austin Dillon?s lost tire with 50 laps to go, sending the leaders to the pits.

Busch wound up going through too many boxes and was sent to the back of the field.

?Sure takes the win away, doesn?t it?? Busch said ruefully on his radio.

Stenhouse took the lead when he swung past Bowman and Elliott, and Keselowski suddenly appeared in his rearview mirror. The former Cup Series champion had been hanging around the top 10 all day but had been struggling with balance, and he seemed to find it at the perfect time.

Keselowski pulled even with seven laps to go, then held his lead on the green-white-checkered restart to win the first overtime spring race at Kansas Speedway.

?We just kept working it all night. Brad never gave up,? said his crew chief, Paul Wolfe. ?Brad never gave up. We fought through it and I knew once we got the balance right we could contend, and we were able to do that tonight.?

What a weekend @kansasspeedway! Cup win No. 30 means as much as the first. Blessed to have cars and a team capable of doing that in the Cup Series.

UNHAPPY HARVICK: Still in search of his first win this season, Harvick led a race-high 104 laps and became the career leader in laps led at Kansas before a cut tire ruined his day. Harvick wound up 13th, even though he may have had the fastest car of the day.

EQUALLY UNHAPPY BUSCH: Nobody was more critical of the rules package than Busch, especially after last week?s race at Dover. Busch was griping about the aero package within the first 10 laps Saturday night, but he was still near the front before his pit-road miscue dropped him from contention.

BOWMAN?S BUMMER: It took Bowman all of 5 minutes to tweet after the race how sorely he wanted his first career win. He has guided the No. 88 to the front each of the past three races, only to settle for runner-up finishes. ?Just made some bad decision and never should have given the 2 car a chance at it,? Bowman said. ?Just made some bad calls through lap traffic and got tied off.?

A FOURTH FAIL: The car chiefs for Joey Logano, Elliott and Kyle Larson were ejected after their cars failed inspection for a second time, though all three made it through on the third try.

In fact, more than a fourth of the field failed their first inspection. That included five of the top eight qualifiers, including Aric Almirola, Daniel Suarez and Martin Truex Jr.

UP NEXT: The series heads to Charlotte for the All-Star race next Saturday night.

Read More: Brad Keselowski Bounces Back from Stomach Virus to Win at Atlanta