Here’s everything you wanted to know about the Delorean DMC-12. 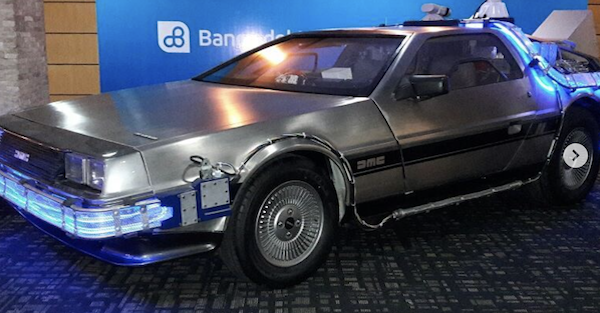 It’s pretty safe to say the movie “Back to the Future,” would not have been the same had it not been for its main character. Sure Michael J Fox and Christopher Lloyd did a great job, but everyone knows the movie’s big star was the Delorean DMC-12.

The Delorean was an engineering marvel and nightmare at the same time. The car is about as interesting as its creator, so here are a few things you should know about the Delorean.

John Delorean was the youngest Vice President in General Motors history before he left to start the “Delorean Motor Company” in 1973. By 1976 his prototype Delorean had begun sparking interest with investors everywhere. The car was produced in Ireland and it was made from 1981-1983.

The Delorean’s body is made of fiberglass with stainless steel panels. They are not painted and no you can’t use steel wool to clean it.

Powering this car to 88 mph was 2.8 liter V-6 made by Peugeot, Renault and Volvo. It was severely underpowered only producing 130 horsepower. This resulted in a pathetic 0-60 time of about 10 seconds.

The car was plagued with issues ranging from a faulty alternator to poor radio reception. One of the biggest issues was with its weak engine. A twin-turbo V-6 was considered, but finances kept it from ever becoming a reality.

The Delorean DMC-12 was originally named after its expected price tag of $12,000. By the time the car was released that price had more than doubled to $25,000.

A total of 9,000 Delorean were produced. Six Deloreans were made for the movie “Back to the Future.” Only three still exist.

John Delorean was arrested in 1982 during a sting operation for allegedly trying to buy cocaine worth 6.5 million dollars. He was later cleared of all charges but the damage was done. The company went under and that was the end of one of the coolest and slowest cars ever made.

Related: Here’s everything you wanted to know about the Chevrolet Impala