Here’s everything you wanted to know about the Chevrolet Impala 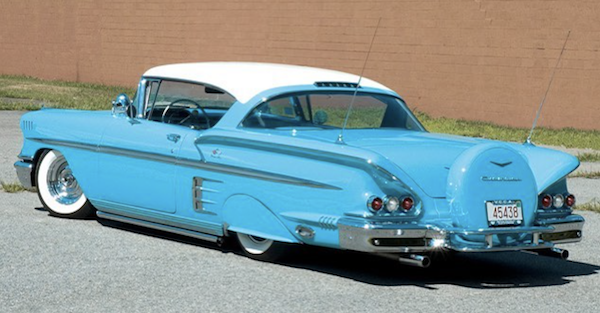 The Chevrolet Impala is one of America’s most iconic and loved cars. It seamlessly blends luxury, practicality and value into a package that has stood the test of time. Some consider the Impala to be a forefather to the American Muscle car, and for that we salute it. The car has gone through several changes since its debut in 1958. Some good and some not so good. Here are some of the most noteworthy moments in Impala history.

Technically the first generation Impala only lasted for one year. It debuted as a high-end Chevy Belair and did so well that GM was forced to make the Impala its own model the very next year.

During the next two models years we saw one of the most distinctive and unique cars Chevy had ever released. Its rear “bat wing” lid was a sight to see and the car’s popularity blew up with almost 500,000 units being sold in 1960.

The 3rd generation Impala ran from 1961-1964 and would end up being one of the most important American cars to date. These were the game changing years in which the Super Sport and the world famous 409 engine were released. The SS Impala played an integral role in formulating what we now know as the original Muscle cars.

Starting in 1965, the Impala sales numbers went through the roof. The first year of the redesigned 1965 Impala Chevy sold over 1 million units. 1969 was the last year of the station wagon, and Chevy also decided to do away with the famous SS model.

The 1970s brought us underpowered land yacht versions of the Impala, but they still sold like hot cakes. We saw the end of the convertible, and towards the end of the fifth generation sales finally started to decline.

The sixth generation Impala took a turn for the worse. This generation Impala was much shorter, narrower, and taller. Sales started to plummet and the gas crisis wasn’t helping. The inline 6 cylinder was brought in to help, but this generation was simply not very popular. It was eventually discontinued and the Caprice took over.

We didn’t see an Impala after 1986 until the return of the Super Sport in 1994. A short run from 94-96 gave us one of the most memorable Impala’s in recent times. Powered by the Corvette’s LT1 engine, the new Impala was based off the police package Chevy Caprice. It’s 5.7 liter LT1 produced 260 horsepower and the car featured a lowered sport suspension, dual exhaust, disc brakes and retro Impala badging.

Starting in the year 2000 we saw the Impala completely morph into bland sedan that seemed destined for fleet service. They switched the entire platform to front-wheel drive, and the car had lost any and all of its original Impala DNA. The car was considered very boring, and purists don’t even consider this anything more than a marketing attempt to capitalize on a famous name plate. We did see a come back of the SS yet again in 2004. It came with a 240 horsepower Supercharged V6, but the car just didn’t resonate with enthusiasts. Even their attempt to stick a V8 back in the car didn’t work out all that well in the sales department.

The next major redesign for the Impala came in 2014. Chevy realized the previous model was simply outdated, and couldn’t compete outside of selling very well as a fleet vehicle. The current model Impala is considered to be a very stylish car and definitely a step in the right direction of paying homage to the originals.

Although there are talks of GM pulling the plug on the Impala in the next few years, most will always remember the Impala as one of the most influential and trend setting cars of our time.

Related: Here’s everything you need to know about the workhorse Ford F-150