This Lamborghini Huracan Was Modified for Off-Road Racing, and It Looks Incredible 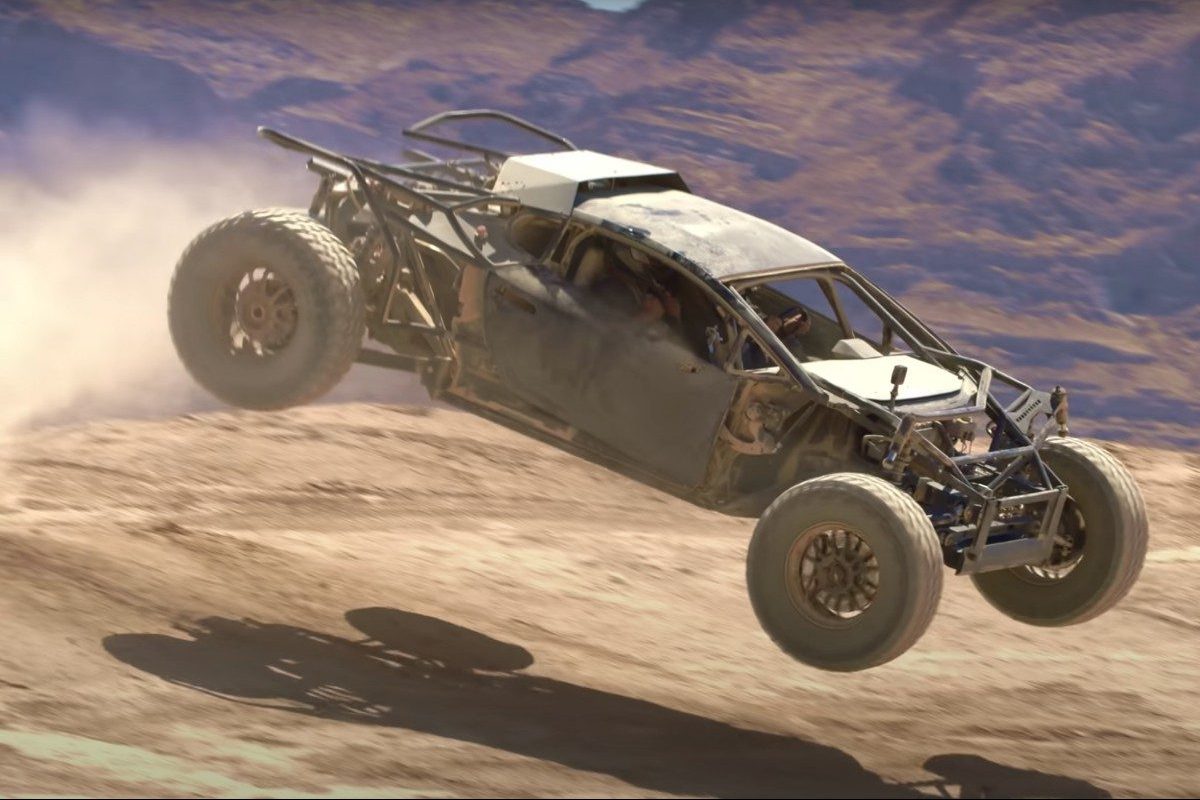 Ah, the Lamborghini Huracan. A perfect example of a well-executed modern Italian supercar.

When you picture the attributes of a Huracan, you may think of sleek body styling, low center of gravity, wide grippy street tires, and that beautiful sounding V10 engine.

Well, this particular Huracan has absolutely none of that. Let me introduce you to a truly unique Lambo nicknamed the “Jumpacan.” This thing looks like it came straight out of Mad Max.

How Did This Off-Road Lamborghini Huracan Come to Be?

This one-of a-kind creation is owned by Chris Steinbacher. Most people know him from his popular YouTube channel B is for Build.

Now, Chris is certainly used to thinking outside the box with his projects, but this one set the bar significantly higher than usual. A while back, he purchased a stripped Huracan chassis, and what he did with it was unbelievable.

When he began this project, he had one main goal: to build a desert off-roader specifically for the Mint 400 race. If you’ve never heard of the event, it’s an iconic off-road race in Las Vegas, Nevada that’s been taking place for decades now.

Keep in mind, the automaker Lamborghini has never had a vehicle compete in the Mint 400. I mean, they’re not particularly known for off-road vehicles other than the tractors they made at the very beginning of the company’s life. The low ground clearance of their modern cars don’t typically mesh well with sandy whoop sections. The Lamborghini Urus would be the closest match, and even that one would be questionable for an off-road race.

Taking a look at where Steinbacher is at now with the off-road capable Huracan, I’d say he’s well on his way to achieving his Mint 400 goal. Let’s check out exactly what this creation consists of in the specifications below.

On paper, it’s still technically a Lamborghini, but, as you could imagine, there are very few actual Huracan parts left of this thing. However, it still utilizes the body, scissor doors, and gearbox from the original car.

Under the hood, you’ll quickly notice that the V10 engine, which originally produced over 600 horsepower, has been swapped out with a Chevrolet LS V8 engine. Current power numbers and top speed are still unknown. While it uses the original Lamborghini manual transmission, the all-wheel drive power delivery has been changed to rear-wheel drive.

With a race as grueling as the Mint 400, obviously some major off-road suspension upgrades were in order. Practically everything on the car was custom-made, including the long-travel suspension you’ll find equipped. For traction on the rough terrain, 37-inch tires have been fitted as well.

Basically all of the body panels have been removed and replaced with a tubular reinforced structure, and the glass windows are no longer present. It makes for a pretty dusty ride along, but Steinbacher had to rid those unnecessary parts.

In the video above, you’ll see the first time that Chris had the chance to take the car out for a real test drive in similar environments. Here, he realistically tested the cars capability on the dirt, and even got a couple jumps in. Mint 400 CEO Matt Martelli was also there to witness the testing.

It did fairly well on smoother ground, but unfortunately, the car didn’t handle the jumps and hard landings as well as he had hoped. Towards the end of the video, Chris discusses that the Jumpacan will need further upgrades including more suspension travel, more ground clearance, and some additional skid plates.

If all goes to plan, this racer is going to have one hell of a time at the Mint 400. Not only that, but Steinbacher will be making history by using a supercar from Italy. I’m beyond excited to see the final results, and witness what it’s capable of during the actual race.

If you’re looking to follow along with the build, check out the B is for Build YouTube channel, were Steinbacher regularly updates his viewers on his current projects. Will this car have potential to take top prize at the Mint 400? Only time will tell, but one thing’s for sure: he’ll have one of the most badass vehicles in attendance.