Buggy With 37-Inch Tires Looks Like an Insanely Fun Ride 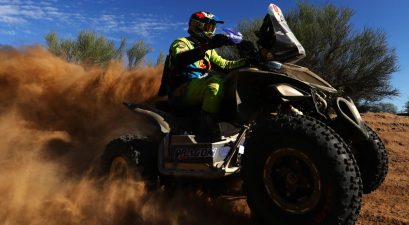 ATV vs. UTV: A Look at the Differences, and Which Is the Best for You

If you’re a fan of epic off-road shenanigans like we are, then you’ve probably just about seen it all when it comes to extreme all-terrain activities. Or at least you think you have.

The great thing about the world of off-roading is that creatively-driven folks are always coming up with new and exciting ways to make freakishly tricked out off-road vehicles. Enter this Hayabusa-powered Samurai buggy with the ability to do some serious rock crawling.

Just watch the video of this thing in action, and you’ll be blown away by both its look and performance.

Read More: This RC Toyota Truck Isn’t Just a Rock Crawler, It Can Drive Through Water and Under Ice, Too

Listen to the sounds of that engine! As it turns out, adding a sport bike motor to a buggy isn’t such a bad idea. Boasting an engine with RPM levels in the tens of thousands, there’s no doubting that this buggy is a certified beast, and a quick look at its specs only proves that further.

Owner Austin Witherow decided to add the full tube cage and chassis for looks and reliability, making the Samurai much more durable than in stock form.

The real feature of the build is the drivetrain, though, which is anchored by a Suzuki Hayabusa engine mated to a Toyota transmission with Toyota axles and bolted to a set of massive 37? tires. The engine is mated to the transmission via a custom shorty driveshaft, just one of many custom touches that make this one of the coolest off road rigs out there.

Damn. Well, apparently this dude really knows what he’s doing. We’ll be interested to see what he can cook up next, but we’re thinking he may have just a little bit of trouble outdoing this off-roading masterpiece.