This Road Rage Photo Isn’t What It Seems, Guy Holding Gun Speaks Out 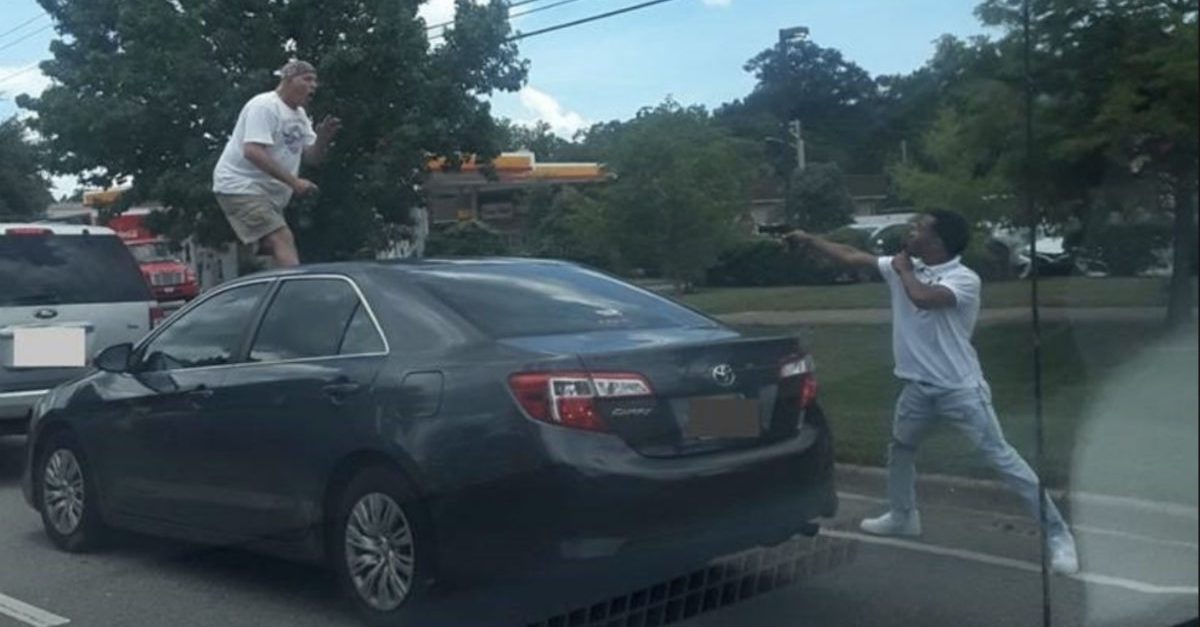 They say that a picture is worth 1,000 words, but the above photo of an escalated road rage incident is not all that it appears. Especially if you ask the man holding the gun.

23-year-old Maurice Mayo was at a traffic light in Fairhope, Alabama, when he got out of his Toyota Camry to exchange words with the driver of a red hatchback. Usually conversations between strangers at traffic lights aren’t the most friendly of talks, which was certainly the case here. The situation went to another level of unfriendly, though, when the driver of the red hatchback jumped onto the hood of the Camry and smashed the car’s windshield with his foot.

That’s when Mayo went back inside of his Camry and pulled out a gun.

Even though Mayo may look like he’s ready to pull the trigger in the photo provided by the Fairhope Police Department, he made it clear in a Facebook post that he did not intend to use the weapon and only showed it to deter the crazed driver and protect his pregnant girlfriend. The reason for Mayo’s ultimate arrest, which Fairhope Police Department also explained, was for him carrying the pistol without a permit.

Read More: This Couple Got a Huge Helping of Texas Road Rage and Things Got Ugly Fast

Let’s hope that the mace-carrying hatchback driver — who, as Mayo guesses, probably “was on sum type of drugs” –eventually gets brought to justice. Can’t have a wild man like that out on the loose.

Lost in all the craziness of this Alabama road rage debacle, though, was the last bit of Mayo’s Facebook post. Did you notice it?

Now, I’ve seen a fair share of over-the-top gender reveals in my day, but this one is WAY out there. Sure, it doesn’t involve a cake, a piñata, or a baseball that explodes red or blue powder, but it still has the element of surprise. Definitely heavy on the surprise. I mean, this reveal had about as much build-up as any drama or suspense movie out there.

It’s not that often that an instance of road rage ends on a happy note. But, all things considered — and by “things,” I mean the arrest, the whole pointing the gun deal, the at-large mad man, and the overall jarring trauma brought on by the whole situation — everything turned out alright here.

Read More: If You’re Going to Be Stupid and Road Rage, Just Don’t Run into a Guy Like This