Despite a host of issues, NASCAR’s Brian France is all smiles about NASCAR’s future 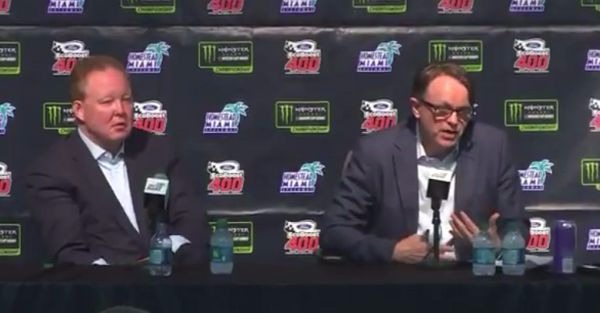 In the early 2000s, NASCAR was at the height of its popularity. Ratings were sky-high as well-liked drivers such as Jeff Gordon, Tony Stewart, and Dale Earnhardt Jr. were threats to win every weekend. However, it’s obviously not the early 2000s anymore and all three of those drivers have retired from full-time competition.

Nevertheless, NASCAR Chairman & CEO Brian France has a bright outlook on the future of NASCAR, especially when it comes to the young talent coming into the sport.

?They are here,? France said prior to the season-ending race at Homestead, according to NASCAR.com. ?They are here, and they?ve got to develop their performance, but they?re doing well. You look at Ryan Blaney, you look at Chase (Elliott) almost making the final here in Miami. Go down the list. We?ve got a loaded group.

?But it?s true, we?re in a transition, too. But that happens from time to time, not usually in the concentrated manner that we have now, but it happens. But we?re excited. We?ve got a great, great bunch of 19-, 20-(year-olds), and they?re talented, so we?re in good shape.?

The group may be loaded but the gun is running low on bullets.  In addition to Dale Jr. leaving, Matt Kenseth and Danica Patrick have retired. Even with a Homestead chock full of story lines, preliminary TV ratings show a decline in year-over-year audience.

RELATED: In a stunner, preliminary ratings show Homestead didn’t do well on TV

So NASCAR is putting  its eggs in the young gun basket. One of those talented 19 year olds is William Byron, who will drive the No. 24 Camaro ZL1 next year for Team Hendrick. Byron won the XFINITY Series championship in 2017 and already has 11 NASCAR wins under his belt between the XFINITY and Truck Series.

Another young driver looking to prove himself at the top-level of NASCAR is 21-year-old Erik Jones, who will be taking over the No. 20 Toyota Camry at Joe Gibbs Racing, which was piloted by former Cup Series champ Matt Kenseth this year. Unable to secure a ride for 2018, Kenseth is yet another driver that made a name for himself in the early 2000s that’s likely competed his last full-time season in the Cup Series.

Adding to the list of drivers who will be exciting NASCAR shortly is Danica Patrick. Winless in her six seasons in the Cup Series, she recently announced she’ll retire from NASCAR following the 2018 Daytona 500.

Danica Patrick was fighting back tears as she announced this is her last full-time season in NASCAR. pic.twitter.com/0vaBzNV0SB

Even with all these changes, NASCAR’s President, Brent Dewar, is looking at the situation with a glass half-full approach.

?We anticipate every decade you?re going to go through this rotation, and between NASCAR Next and Drive for Diversity, these young stars that you?re talking about have all come through those classes, and they?re all good wheel men and women that are coming up through these series,” Dewar said. “And I think that?s the key thing, and we?re working with them in terms of how they work outside the car.

?And I think the other part is if you look at most sports, name any other major sport where you get to have a 15-  to 20-year career at the highest level. It just does not exist. Those are exceptions. It?s the norm here.”