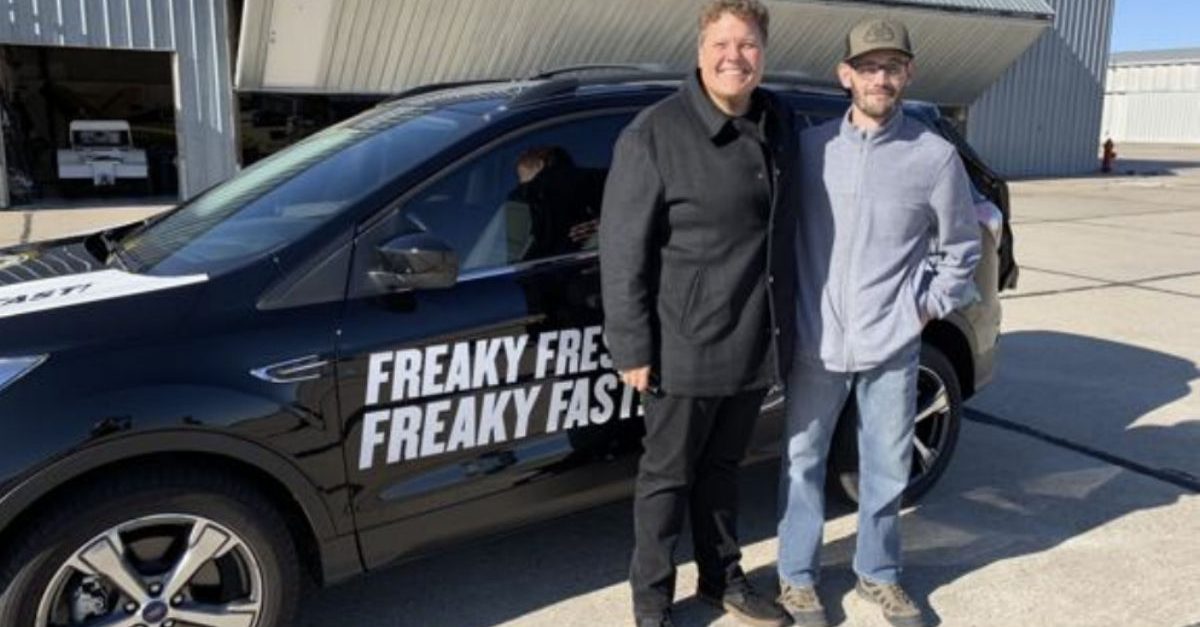 The founder of the Jimmy John?s restaurant chain made a little delivery of his own Saturday in Columbus, Nebraska.

Jimmy John Liautaud flew to Nebraska to present a new Ford Escape to delivery driver Zach Hillmer, who responded to an errant call to the Columbus Jimmy John?s store last week and gave an ailing Army veteran a ride to a local hospital.

Hillmer said Liautaud called the store Friday morning and spoke with him over the phone.

During the conversation, Liautaud asked him how his delivery vehicle was driving.

The 1991 Chevrolet Cavalier is on loan from Hillmer?s parents. Hillmer said he hit a deer with it recently and made repairs, but he?s no auto mechanic. He couldn?t recall the odometer reading but estimated it at upward of 160,000 miles.

Liautaud told Hillmer that he was going to give him a new Ford Escape to thank him for his actions.

On Saturday, store employees gathered as Liautaud presented the new vehicle. He had flown in from Chicago to make the delivery.

The new Escape is black and has Jimmy John?s decals on the outside.

Hillmer said he doesn?t mind that at all.

?He said I could take them off,? Hillmer said, ?but I?ll probably leave them on there.?

Mostly, he was overwhelmed by the gift.

?I couldn?t believe it,? he said. ?It was such a generous thing to do.?

Liautaud said Saturday that he was simply responding in kind.

She had just returned to Florida after her brother, Greg Holeman of Columbus, was released from the hospital after surgery.

But he had developed some complications. Seeking help, she thought that she had dialed a social worker.

Eventually, Hillmer picked up Holeman and took him to an emergency room.

At last report, Holeman was home and doing better.

Hillmer, 38, also is a veteran. He said he served in the Navy from 2000 to 2004. Born and raised in Pierre, South Dakota, he moved to Clarks, Nebraska, about three months ago.

He said he was glad that he could help a fellow veteran, although he didn?t know of Holeman?s service until later.

?That?s really what I was most proud of,? Hillmer said, ?that he was a vet, and I could help him out.?

Now he plans to return the Cavalier to his parents.

?It?s getting pretty close to its last legs,? he said. ?So it couldn?t have come at a better time. It?s done its job for sure.?

He plans to continue working at Jimmy John?s for a while.

?It?s a good job, and I like it,? he said, before politely telling a reporter that he had to go soon and make his next delivery.