Gas prices are soaring due to Hurricane Harvey 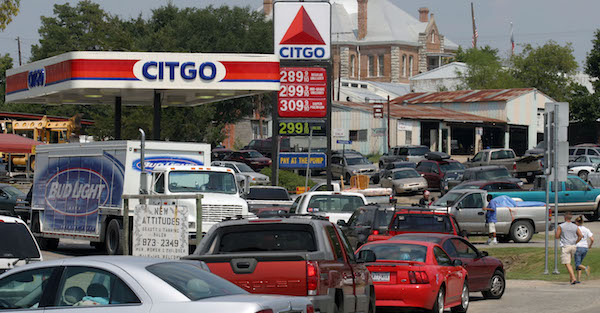 Lawrence Jenkins/Getty Images
DALLAS-SEPTEMBER 22: Gas is rare between Houston and Dallas, but some of the evacuees managed to find some stations still open September, 22 2005.

The effects of Hurricane Harvey have been devastating in many areas along the coast in Texas, and the hurricane has forced oil refineries to shut down.

Motiva’s refinery in Port Arthur, Texas is the biggest refinery in the United States, and it has shut down due to flooding. As a result, gas prices are soaring across the country according to Bloomberg.

Gas futures for September delivery are up 12 percent, while October futures are also expected to be up. The average price of gas per gallon across the country is currently $2.449, which is up from $2.348 from last week.

Related: Lines to fill up for gas in Texas are insanely long

Lines for gas have been extremely long in Texas as the demand has risen. The Energy Department is releasing 500,000 barrels of oil from its reserve to help with the crisis.

Prices are expected to be higher for a few weeks, but they will eventually come back down in time once the demand isn’t as severe.

Consumers can expect a steep increase in the mean time, though. The effects of the hurricane were obviously severe and devastating along the coast in Texas, but people across the country will be feeling the effects on a minor scale when they visit gas stations.