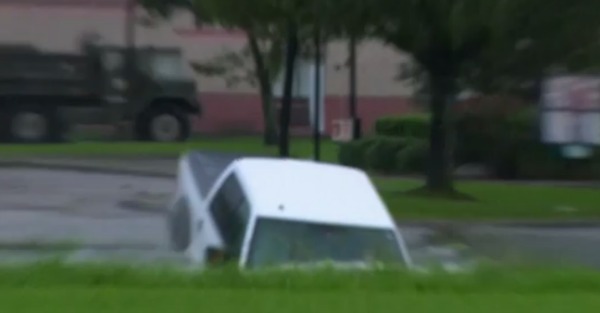 News reporters are on the front lines during weather disasters such as Hurricane Harvey and the related flooding. Being in the thick of the action means that they have to be ready for anything. Including, for at least the second time in a week, rescuing someone from a flooded car. This time, however, there wasn’t enough time to wait for the authorities.

CNN correspondent Drew Griffin had his live broadcast interrupted when he noticed a Ford F150 drive into a flooded ditch and start to float away. The crew acted fast. While one member called 911, Griffin asked for a rope or power cord to go get the man out of his truck before it sank. They were able to pull the man to safety.

This is why driving through flood waters is so dangerous. Even calm looking water can hide a ditch or washed away street. You never know what is going on underneath the surface. Even if your truck is tall enough for the expected level of water, this video shows how quickly that can change. It is a good thing this news crew was there when it was.