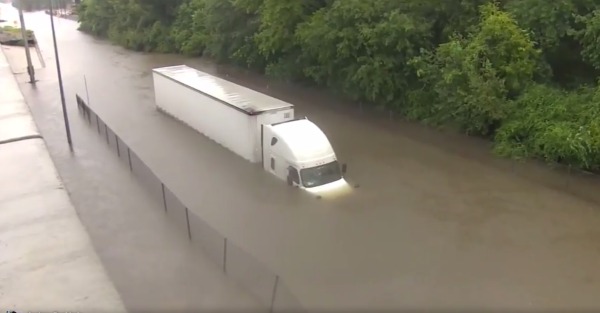 Hurricane Harvey has been devastating Houston, Texas and the surrounding areas. As with all disasters, however, there are small moments of ordinary people doing extraordinary good. This local news team not only caught one such moment, they were a part of it.

KHOU’s Brandi Smith and her crew were reporting on the flooding when they noticed a driver trapped in his truck in the water below the bridge they were reporting from. As luck would have it, a Sheriff’s truck towing a boat happened by during the live broadcast and Smith was able to flag it down.

The moment @BrandiKHOU flagged down a sheriff's office boat to save a stranded trucker https://t.co/VoRT7ejo7Q pic.twitter.com/FTXRA13TH5

Brandi and the crew continue to watch as police make their way to the trapped trucker, and the police inform them that a trucker died in almost that very spot in a flood a year earlier.

There is a happy ending for everyone as the man is pulled from the truck and brought to solid ground. Smith is understandably beside herself with gratitude for the police and the man’s safety.

Related: This Chevy with a Family of 4 Got Seriously Stranded in a California Flood