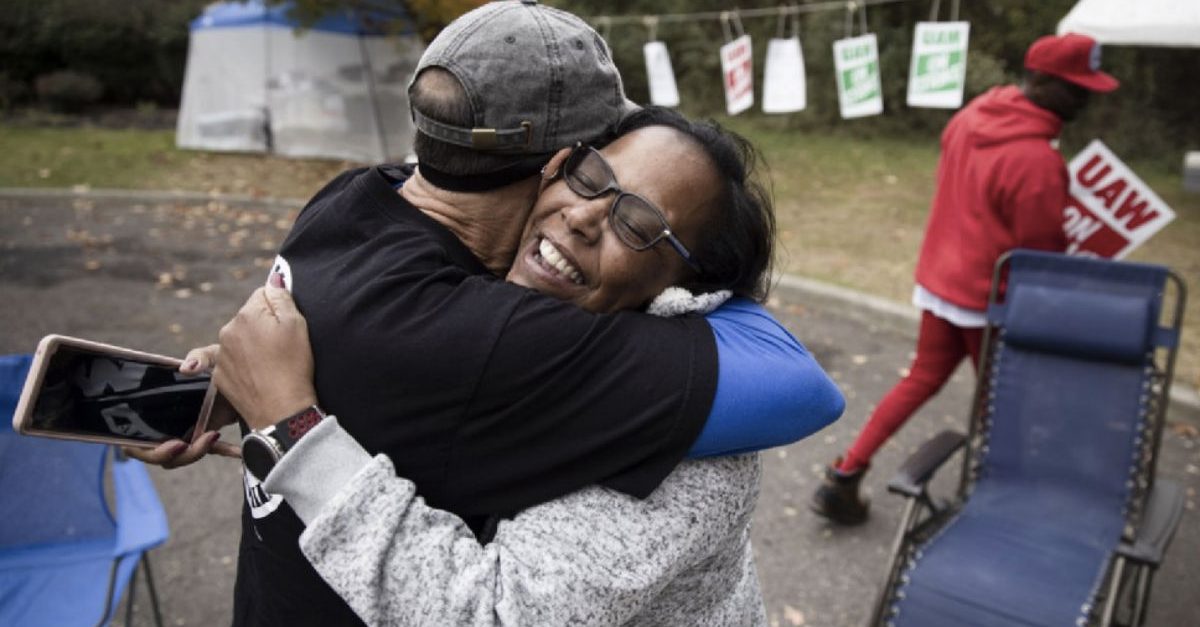 DETROIT (AP) ? Bargainers for General Motors and the United Auto Workers reached a tentative contract deal on Wednesday that could end a monthlong strike that brought the company?s U.S. factories to a standstill.

The deal, which the union says offers ?major gains? for workers, was hammered out after months of bargaining but won?t bring an immediate end to the strike by 49,000 hourly workers. They will likely stay on the picket lines for at least two more days as two union committees vote on the deal, after which the members will have to approve.

Terms of the tentative four-year contract were not released, but it?s likely to include some pay raises, lump sum payments to workers and requirements that GM build new vehicles in U.S. factories. Early on, GM offered new products in Detroit and Lordstown, Ohio, two of the four U.S. cities where it planned to close factories.

?It sounds good,? Clarence Trinity, a worker at GM?s engine and transmission plant in the Detroit suburb of Romulus, Michigan, said of the deal. ?But I have to see it in writing or hear from the leaders.?

The deal now will be used as a template for talks with GM?s crosstown rivals, Ford and Fiat Chrysler. Normally the major provisions carry over to the other two companies and cover about 140,000 auto workers nationwide.

Art Schwartz, a former GM negotiator who now runs a labor consulting business, said depending on the contents, the contract could influence wages and benefits at other manufacturers. But he said foreign automakers with U.S. factories, mainly in the South, always give pay raises and shouldn?t be affected much.

?They?re located in low-wage areas and they pay well,? he said. ?The people who work there are kings of the locality.?

The strike did show that the union still has power in the auto industry. ?I think economically the UAW will do just fine in this agreement,? Schwartz said.

The deal cost workers thousands of dollars in wages, and analysts estimate that GM lost about $2 billion due to the monthlong strike. It?s unclear if GM will be able to make up some of the production lost to the strike by increasing assembly line speeds or paying workers overtime. Many GM dealers reported still healthy inventories of vehicles even with the strike.

If all of the committees bless the deal, it?s likely to take several days for GM to get its factories restarted.

Read More: How the GM Strike Is Affecting Workers, Dealers, and Car Owners

GM and the union have been negotiating at a time of troubling uncertainty for the U.S. auto industry. Driven up by the longest economic expansion in American history, auto sales appear to have peaked and are now heading in the other direction. GM and other carmakers are also struggling to make the transition to electric and autonomous vehicles.

Meanwhile, President Donald Trump?s trade war with China and his tariffs on imported steel and aluminum have raised costs for auto companies. A revamped North American free trade deal is stalled in Congress, raising doubts about the future of America?s trade in autos and auto parts with Canada and Mexico, which last year came to $257 billion.

Amid that uncertainty, GM workers have wanted to lock in as much as they can before things get ugly. They argue that they had given up pay raises and made other concessions to keep GM afloat during its 2009 trip through bankruptcy protection. Now that GM has been nursed back to health ? earning $2.42 billion in its latest quarter ? they want a bigger share.

If approved, the contract agreement will set the pattern for negotiations at Fiat Chrysler and Ford. It wasn?t clear which company the union would bargain with next, or whether there would be another strike.

The union?s bargainers have voted to recommend the deal to the UAW International Executive Board, which will vote on the agreement. Union leaders from factories nationwide will travel to Detroit for a vote on Thursday. The earliest workers could return would be after that.

In past years, it?s taken a minimum of three or four days and as long as several weeks for the national ratification vote. Workers took almost two weeks to finish voting on their last GM agreement, in October of 2015. Then skilled trades workers rejected it, causing further delays.

?The No. 1 priority of the national negotiation team has been to secure a strong and fair contract that our members deserve,? union Vice President Terry Dittes, the chief bargainer with GM, said in a statement Wednesday. The agreement, he said, has ?major gains? for UAW workers.

This time around ? with a federal corruption investigation that has implicated the past two UAW presidents and brought convictions of five union officials ? many union members don?t trust the leadership and likely won?t want to return to work until they?ve gotten a chance to vote on the deal themselves.

In August, the FBI raided the suburban Detroit home of UAW President Gary Jones. He has not been charged and has not commented on the raid. Earlier this month, Jones? successor as union regional director in Missouri was charged in a $600,000 embezzlement scheme, and another UAW official pleaded guilty to taking kickbacks from union vendors. Eight other people ? including five UAW officials ? have been convicted over the past two years of looting a jointly run Fiat Chrysler-UAW training center for blue-collar workers. Another official was charged in September.

The strike had shut down 33 GM manufacturing plants in nine states across the U.S. It was the first national strike by the union since a two-day walkout in 2007 that had little impact on the company.