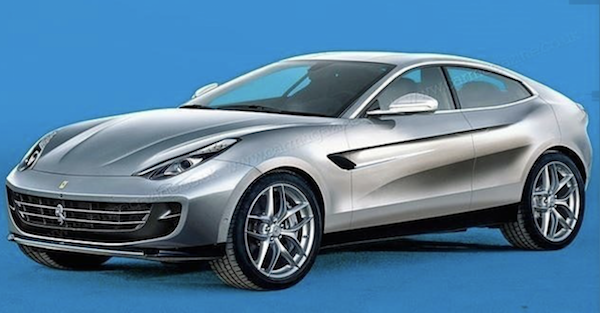 FCA boss Sergio Marchionne confirmed that we will see a Ferrari SUV in 2019 or early 2020. The problem is, Ferrari doesn?t want to call it an SUV.

Ferrari said it?s going to call their GTC4Lusso based vehicle an ?FUV,? which stands for Ferrari Utility Vehicle. Ferrari is so crazy about this not being considered or called an SUV, they are even going to great lengths to hide the fact that it?s a four-door. According to Autocar.com:

He added: ?Ferrari has to remain consistent, doing what we know to do, which is delivering cars that are able to deliver emotion. Sports cars.?

However, Warburton suggested that it is a ?question of semantics?, stating that while Ferrari management continues to tell investors that it will not build an SUV or a model with four doors, the rear doors will not be visible and will instead ?use a clever hidden arrangement?.

This is getting a little ridiculous as everyone will consider this an SUV. What makes it even crazier is that Ferrari isn’t the first sports car or ultra high-end luxury car company to come out with an SUV. This is old news, and most people know automakers need high-profit vehicles like super popular SUVs to be able to fund their crazy supercar projects. Lamborghini, Rolls-Royce, Aston Martin are just a few that are in the process of making an SUV. According to Autocar, the ?FUV? will cost around $250,000 and Ferrari will produce 2000-3000 unit per year. This entire fiasco is going to make cars and coffee so much fun when an ?FUV? cruises in. ? He dude, nice SUV!!”

Related: Japanese Ferrari barn find is worth a lot more than it looks