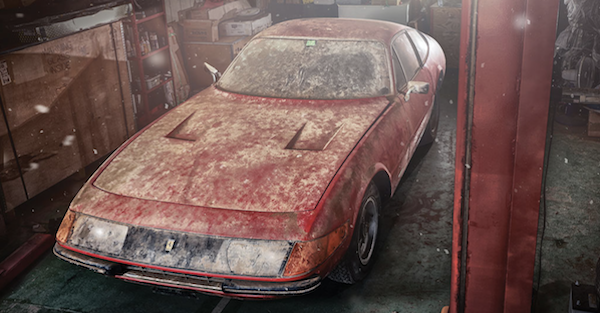 What you’re looking at is one of the most exciting barn finds in recent history. Well, it was actually a garage find but, if you’re an Italian Exotic car collector or fan, this is just about as good as it gets. A super rare Ferrari was just pulled out of a garage after being put there in 1979. This dusty old Italian sports car is none other than a 1969 356 GTB/4 Daytona.

Only five lightweight all aluminum-bodied GTB/4 Daytona’s were produced in 1969. The cars were made to be raced in the 24 Hours of Daytona Event but, only this one was also street legal. The GTB/4 has seat belts, turn signals and a registration plate so it can be used like a normal car. To add to its allure, enthusiasts thought is was lost for good. The car was shipped to Japan in 1971 and, was not spoken of ever again. It did change hands a few times in Japan but was put in hibernation in 1979 by a man named Makoto Takai.

Typically, a normal GTB/4 Daytona sells for around $600,000 if in decent condition. According to Marcel Massini, a Ferrari expert who inspected the car, it’s in “good condition” and “remarkably authentic.” Although the car was modified slightly for Japanese registration, Massini did confirm it has the original engine and chassis. All things considered, experts expect this car to pull in 1.8 million dollars.

For a Ferrari that was only driven for about 10 years, it actually has a decent amount of miles clocking in at 22,611. Like any barn find, it’s hard to tell its exact condition from looking at pictures, but considering its rarity, a full restoration will no doubt cost hundreds of thousands of dollars.

According to the dailymail.com.uk Massini added:

This gem will be auctioned off by Sotheby’s at the Ferrari factory in Maranello, Italy on September 9th. For more information on this car and instructions on how to bid click here. Goodluck!

Related: There’s a reason this Ferrari is worth $1.3 million